With the help of U.S. Embassy Uruguay, Alex English arrived in the capital city Montevideo for the third time to meet and work with local children of different ages on how to embrace sports to overcome obstacles and everyday challenges. The workshop took place at Centro SA.CU.DE, located in the Casavalle neighborhood.

This is the third time Alex English visits Montevideo to hold a workshop that goes far beyond sports. These are really motivational and inspirational meetings that encourage disadvantaged kids to think positive, to keep an optimistic attitude towards life and to be confident on achieving their goals and dreams.

Alex English is a member of the United States Basketball Hall of Fame. He was the NBA’s most prolific scorer during the 1980s and retired as the seventh-leading scorer with 25,613 points. After being underutilized by the Milwaukee Bucks and the Indiana Pacers during his first four years in the league, English became the most explosive member of a high-powered Denver Nuggets team that consistently ranked among the league’s top-scoring clubs.

English dominated during the 1980s. During his 10 full seasons in Denver he played in eight straight All-Star Games, won a scoring title, averaged more than 23 points nine years in a row and led the Nuggets to nine consecutive postseason appearances (although never to the Finals). The sleek, 6’7” forward became the first player ever to string together eight straight 2,000-point seasons. And he led the Nuggets in scoring seven times en route to becoming the franchise’s all-time top scorer. 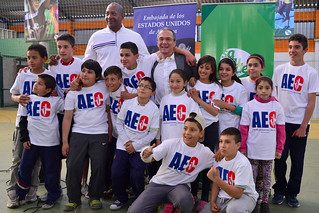