On October 22, U.S. Embassy Chargé d’Affaires Bradley Freden invited the Mayors of Uruguay to an informal lunch at the Official Residence of the U.S. Mission in Uruguay.

During the event Freden, the 16 Mayors that attended, and Embassy staff had a chance to exchange ideas, discuss with Mr. Freden possible ways of collaboration, and mingle in an informal atmosphere. At the end of lunch, during his remarks, Freden thanked all the Mayors for attending the meeting and expressed his best wishes to all of them in their local government projects. 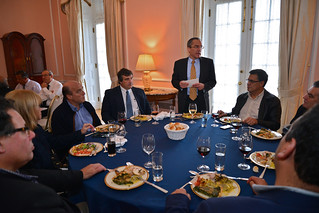