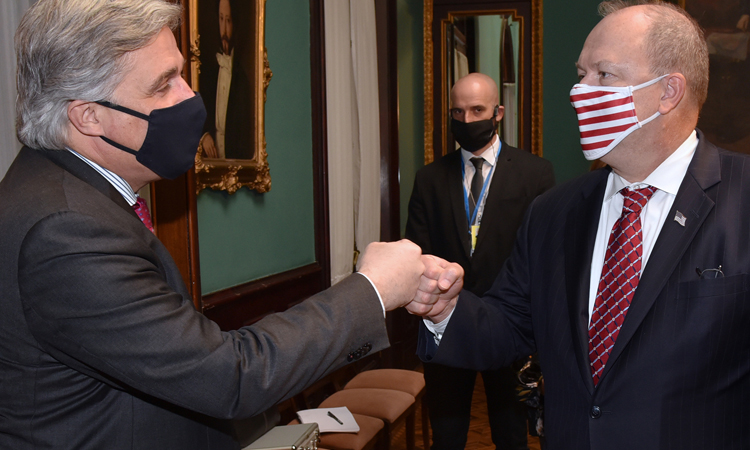 The United States Ambassador to Uruguay, Kenneth S. George, noted that this is the third high-level U.S. government official to visit Uruguay in less than a year. “I’m glad to welcome Counselor Brechbuhl, Secretary Pompeo’s strategic advisor, to Uruguay. His visit reflects the importance of Uruguay to the United States as a partner and friend in the region. It is my hope that more U.S. officials will visit the country and that more Uruguayan authorities will visit Washington, where they are always welcome. We are excited that one of Foreign Minister Bustillo’s first overseas trips will be to the United States – a testament to the value both countries place on our relationship.”

During the meeting with Foreign Minister Bustillo, he and Counselor Brechbuhl discussed the Foreign Minister’s trip to Washington, D.C., next week where he will meet with Secretary of State Mike Pompeo. “ I am honored to have the opportunity to learn more about Uruguay. The effort and commitment of both sides is deepening the relationship between our two countries. As we saw most recently with the COVID-19 pandemic, Uruguay did an excellent job extending humanitarian assistance to cruise ship passengers, many of whom were American, thus helping tremendously with our repatriation efforts. And the United States Embassy provided over $1.7 million in assistance to the people of Uruguay, thus significantly bolstering Uruguay’s response efforts to the pandemic. Secretary Pompeo is looking forward to exchanging perspectives on a wide range of issues during Foreign Minister Bustillo’s upcoming visit to Washington,” stated Counselor Brechbuhl.