Construction of the Residence of the United States Ambassador to Uruguay began in 1938 and was conducted by the Compañía Sudamericana de Construcción under the direction of engineer Horacio García Capurro. The residence was completed and officially inaugurated in September, 1942 by Ambassador William Dawson.

The residence is two-storied and has an area of 1,216 square meters. The grounds of the residence include a swimming pool, tennis court, “parrilla” (barbecue grill) and a picturesque garden containing a wide variety of native Uruguayan vegetation.

Most of the materials used for the construction of the residence, including the white marble in the entry and grand halls, are Uruguayan. The Uruguayan hand-crafted columns in the portico are unique features of the residence; each made in single, continuous pieces.

The residence was designed in the Federal style to replicate the U.S. White House. Thomas Jefferson popularized this classic style of columns at the entrance of his various architectural creations. Use of this popular late 1700’s U.S. independence architectural style, symbolized U.S. commitment to the southern cone and Uruguay as integral parts of the Southern Hemisphere. The residence’s location is also of historical and political importance, as it was strategically placed directly across from the front door of the residence of the Ambassador of the United Kingdom to Uruguay. 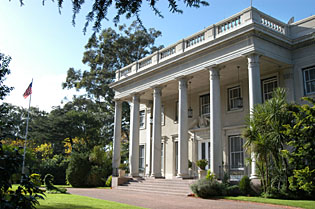 Since its inauguration, the residence has been the home of 22 U.S. Ambassadors and the center of numerous and important events between the United States of America and Uruguay.

President Dwight Eisenhower stayed at the residence during his visit to Uruguay on March 2-3, 1960. The guestroom that President Eisenhower occupied during his historic visit is affectionately known as the “Eisenhower Bedroom.”

In addition to being a diplomatic residence, it is a chief gathering place where U.S. and Uruguayan representatives have developed and will continue to develop the principles of freedom and justice that distinguish the excellent relationship between the two countries.