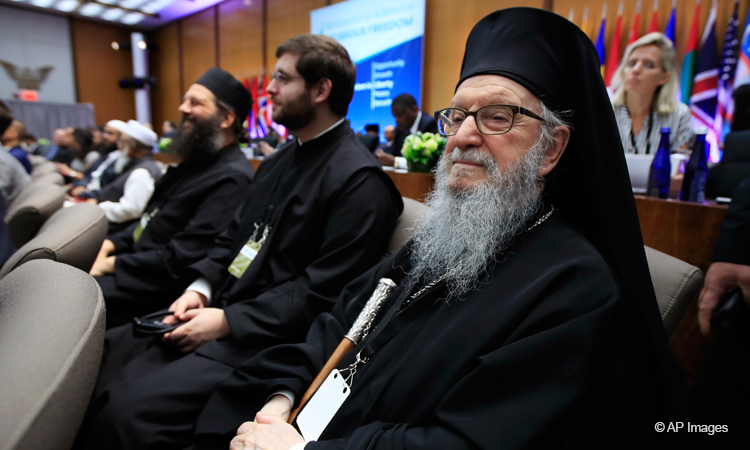 The Universal Declaration of Human Rights proclaims in Article 18 that “everyone has the right to freedom of thought, conscience and religion; this right includes freedom to change his religion or belief, and freedom, either alone or in community with others and in public or private, to manifest his religion or belief in teaching, practice, worship and observance.” The freedom to live out one’s faith is a God-given human right that belongs to everyone. The freedom to seek the divine and act accordingly—including the right of an individual to act consistently with his or her conscience—is at the heart of the human experience. Governments cannot justly take it away. Rather, every nation shares the solemn responsibility to defend and protect religious freedom.

Today, we are far from the ideal declared in the Universal Declaration of Human Rights 70 years ago – that “everyone has the right to freedom of thought, conscience, and religion.” This right is under attack all around the world. Almost 80 percent of the global population reportedly experience severe limitations on this right. Persecution, repression, and discrimination on the basis of religion, belief, or non-belief are a daily reality for too many. It is time to address these challenges directly.

Defending the freedom of religion or belief is the collective responsibility of the global community. Religious freedom is essential for achieving peace and stability within nations and among nations. Where religious freedom is protected, other freedoms – like freedom of expression, association, and peaceful assembly – also flourish. Protections for the free exercise of religion contribute directly to political freedom, economic development, and the rule of law. Where it is absent, we find conflict, instability, and terrorism.

Our world is a better place, too, when religious freedom thrives. Individual and communal religious belief and expression have been essential to the flourishing of societies throughout human history. People of faith play an invaluable role in our communities. Faith and conscience motivates people to promote peace, tolerance, and justice; to help the poor; to care for the sick; to minister to the lonely; to engage in public debates; and to serve their countries.

Religious freedom is a far-reaching, universal, and profound human right that all peoples and nations of good will must defend around the globe.

With this in mind, the Chairman of the Ministerial to Advance Religious Freedom declares: