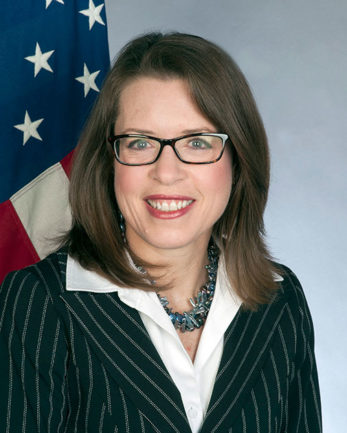 Prior to that Washington assignment, Ambassador Keiderling served as Deputy Chief of Mission and intermittently as Charge d’Affaires in Caracas, Venezuela. She also served as Deputy Chief of Mission in Chisinau, Moldova.  In previous overseas assignments, she was Public Affairs Officer in U.S. diplomatic missions in Cuba, Botswana and Kyrgyzstan.  Earlier in her career, she held diplomatic positions at U.S. embassies in the Dominican Republic, Ethiopia, and Zambia. While serving in Washington at various points of her career, Ambassador Keiderling was Senior Panama Desk Officer, Public Diplomacy Desk Officer for the Caribbean, acting Deputy Director for Central American Affairs, Chief of Staff in the Iraq Office, and Strategic Language Issues Coordinator in the Bureau of Human Resources.

Ambassador Keiderling received a bachelor’s degree from Georgetown University and a master’s degree from the National War College in Washington, D.C. She speaks Spanish, Portuguese, French, Russian, and some Italian and Romanian. She was raised in Latin America and Portugal in a Foreign Service family.  She is married to a U.S. Foreign Service Officer and has two children.