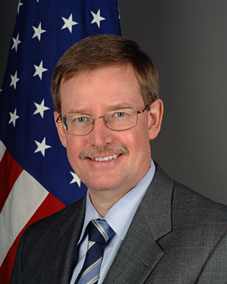 Ambassador Nelson was confirmed by the United States Senate as Ambassador to the Oriental Republic of Uruguay on December 24, 2009. A career member of the Senior Foreign Service, Ambassador Nelson served as Acting Assistant Secretary for Economic, Energy and Business Affairs (EEB) prior to his nomination. In that position he provided the Secretary of State with advice on the full range of international economic issues.

He has previously served as Principal Deputy Assistant Secretary in EEB, Executive Assistant to the Under Secretary for Economic, Energy and Agricultural Affairs, as Director of the Office of Terrorism Finance and Economic Sanctions, Director of the Iraq Reconstruction Task Force, and as Director of the Office of Monetary Affairs. He has also served on the National Security Council as Senior Coordinator for the Sea Island G-8 Summit, and has been posted abroad in Berlin, Madrid, Bonn, Quito, Montevideo and Merida.

Ambassador Nelson began his assignment in Uruguay auspiciously, hosting a visit by Secretary of State Hillary Clinton to attend the inauguration of the new Uruguayan government.  During his time here he highlighted U.S. support for education in Uruguay, including by visits to local schools and to many of the Binational Centers in the interior of the country, and through his success in strengthening the Fullbright program in Uruguay.  He connected with the Uruguayan people through innovative use of new technologies, and with new approaches to ‘sports diplomacy.’ He supported numerous U.S. business investments in the country, and helped U.S. firms highlight their activities in support of the local community.  Under his guidance a bilateral Science and Technology Council met for the first time, resulting in specific ongoing joint research projects.  Finally, under his direction the U.S.-Uruguayan defense relationship reached a new level, with the inauguration of a Strategic Defense Dialogue.