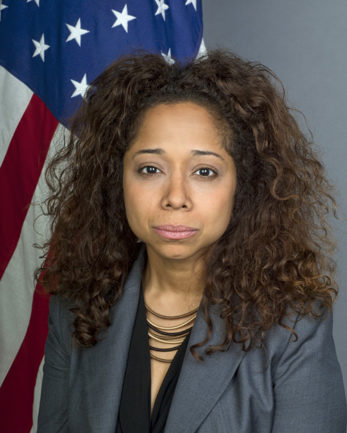 Julissa Reynoso was confirmed by the United States Senate as Ambassador to the Oriental Republic of Uruguay on March 30, 2012.

Prior to her nomination, Ambassador Reynoso served as Deputy Assistant Secretary for Central America and the Caribbean in the Bureau of Western Hemisphere Affairs at the Department of State.

Ms. Reynoso is an attorney by trade and, prior to joining the U.S. State Department, practiced law at the international law firm of Simpson Thacher & Bartlett LLP in New York, focusing on international arbitration and antitrust law. She was also a fellow at New York University School of Law and Columbia Law School.

In 2006, Ms. Reynoso served as Deputy Director of the Office of Accountability at the New York City Department of Education. She has published widely in both Spanish and English on a range of issues including regulatory reform, community organizing, housing reform, immigration policy, and Latin American politics for both popular press and academic journals.

Ms. Reynoso holds a B.A. in Government from Harvard University, a Masters in Philosophy from the University of Cambridge in the U.K., and a J.D. from Columbia University School of Law. After law school, she clerked for the Honorable Federal Judge Laura Taylor Swain. Ms. Reynoso is a member of the Council of Foreign Relations.