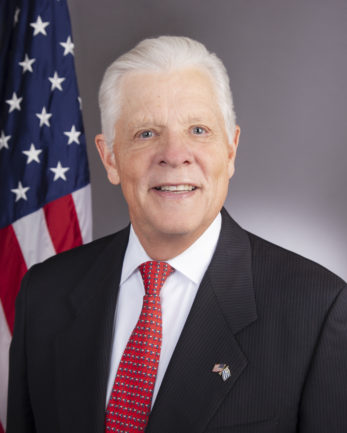 Kenneth S. George was sworn in on September 2, 2019 to serve as the U.S. Ambassador to the Oriental Republic of Uruguay.  Mr. George previously served as Assistant Secretary and Director General of the U.S. Foreign Commercial Service in the Department of Commerce (1981-1985).   He has served as a State Representative in the Texas House of Representatives in Dallas (1999-2003), on numerous city, state, and professional boards and commissions in Texas, and as chairman and CEO of several public and private corporations.  His business activities include work in real estate, the oil sector, and in health care. Since 2009, he has been the owner and manager of Blue Harbor Plantation and Blue Harbor Tropical Arboretum in Roatan, Honduras.

Mr. George earned a B.A. from Washington and Lee University and a M.B.A. from the University of Texas at Austin. He is married and has four children and five grandchildren.