Home Página Inicial | News & Events | President Obama in Vietnam: The Next Chapter in a Renewed Partnership 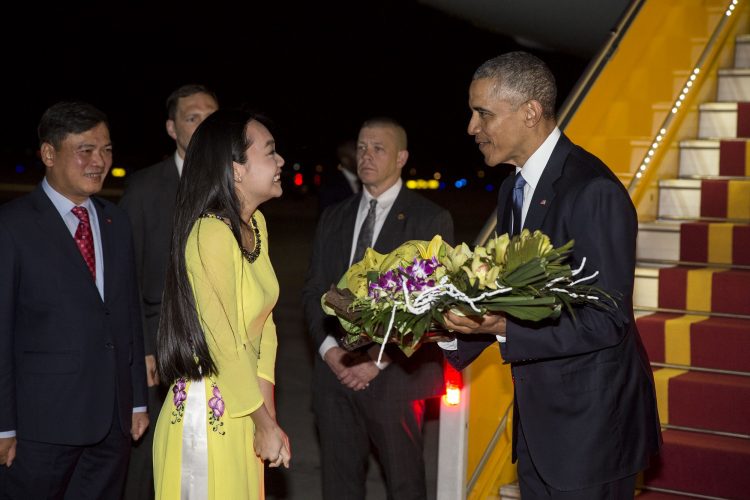 Today, the President became the third U.S. president to visit Vietnam since the normalization of relations between our countries began just over 20 years ago.

For many Americans, “Vietnam” is a word associated with war, and the extraordinarily complex history between our countries. But since normalization began, the U.S. and Vietnam have steadily built bonds of partnership, demonstrating that we can recognize history without being imprisoned by it. Indeed, the President’s visit to Vietnam will be historic not because it is a first, but because our relationship is evolving into a deep friendship and strategic partnership.

The President met with President Tran Dai Quang, Prime Minister Nguyen Zuan Phuc, and General Secretary Nguyen Phu Trong, whom he welcomed to the White House in 2015. It was a historic moment for two countries that were once adversaries. As the General Secretary said at the time:

“I think that 20 years ago, not too many people would imagine a meeting, a substantive meeting between the General Secretary of the Communist Party of Vietnam and the President of the United States. What is of utmost importance is that we have been transformed from former enemies to become friends, partners — comprehensive partners.”

President Obama has made the Asia Pacific region a focus of his foreign policy, and Vietnam  — a large, growing economy in the heart of Southeast Asia —  is critical to those efforts. And during his visit we will have the opportunity to highlight  — and advance  —  our cooperation across several different areas.

Vietnam is a part of the Trans-Pacific Partnership, a trade deal that President Obama secured between the United States, Vietnam, and 10 other countries in the Asia Pacific region. While the TPP  —  like any trade deal  —  is a subject of vigorous debate, its benefits are clear. The TPP will open markets and bring down barriers for American businesses in the world’s largest emerging market, creating jobs at home. The TPP will be good for the American economy, the Vietnamese economy, and the labor and environmental standards that make life better for our people.

The TPP also puts in place strong environmental protections, ensuring that countries like Vietnam crack down on illegal wildlife trafficking, illegal logging, and illegal fishing. These standards will help drive reform within Vietnam that will benefit Vietnamese workers and their environment. Moreover, they are just one part of broader cooperation with Vietnam and other Southeast Asian countries on environmental protection, the development of clean energy, and combating climate change.

Check out what this kind of economic cooperation can mean for American businesses:

The TPP is one piece of a U.S.-Vietnamese partnership that supports a rules-based order in the Asia Pacific. Decades after the end of the war, we are strengthening our military-to-military relationship, which will help us provide assistance to Vietnam on a range of important areas  — from humanitarian assistance and disaster relief, to supporting maritime security and peacekeeping missions. The U.S. and Vietnam are committed to upholding basic international principles like freedom of navigation. And at a time of tension in the South China Sea, the United States will support the peaceful resolution of disputes under international law  – a principle we made clear at our recent Summit with 10 Southeast Asian countries.

Our investment in Vietnam’s future is perhaps most clear in our growing engagement with its young people. Today, Vietnam has more students studying at U.S. universities than any other Southeast Asian country. Nearly 12,000 young Vietnamese are developing new skills as members of the President’s Young Southeast Asian Leaders Initiative (YSEALI). American academic and technology leaders like Intel, Oracle, and Arizona State are helping Vietnam boost training in STEM education.

And today, the President announced that, for the first time, the Peace Corps will come to Vietnam. Our Peace Corps volunteers will focus on teaching English, and the friendship that our people forge will brings us closer for decades to come.

You can see the difference this kind of people-to-people partnership can make when you tune in to President Obama’s townhall with YSEALI young leaders in Ho Chi Minh City on Wednesday.

As we develop this economic, strategic, and people-to-people relationship, the human rights of the Vietnamese people will remain a focus of our efforts. We have made some progress in our dialogue with Vietnam on these issues, but continue to have serious differences with the Vietnamese government over how it approaches issues related to political dissent, independent civil society, and a free press. The President will be meeting with members of Vietnamese civil society to hear directly from them during his visit. And there are concrete steps that Vietnam can continue to take, including through legal reform, to allow its people to reach their full potential and to uphold universal values.

Since taking office, President Obama has used diplomacy to advance America’s interests in security, prosperity, and human dignity around the world. For the many countries who we have called friends for decades, that means strengthening alliances. For others, it means a willingness to extend a hand to new partners and former adversaries. Most prominently, we have begun to build new bridges of friendship with the people of Myanmar and Cuba, where policies of isolation were not helping people, and were denying the United States openings to advance our interests in Asia and Latin America.

The President’s visit to Vietnam allows the American and Vietnamese people to reflect on how far we’ve come, and how much further we can go in building this emerging partnership. What’s clear is how much both of our countries are gaining through peaceful cooperation.

About the Author: Ben Rhodes serves as the Assistant to the President and Deputy National Security Advisor for Strategic Communications and Speechwriting.