Home Página Inicial | News & Events | Presidential letters to successors: What do they say? 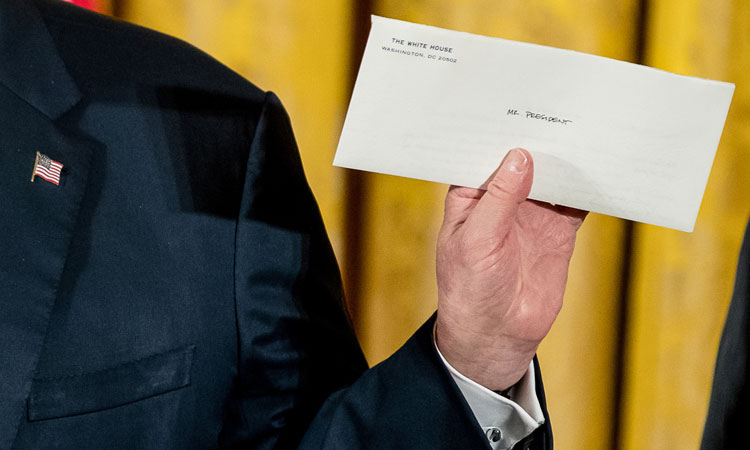 When President Trump arrived at the White House after being sworn in as the 45th president, he found waiting for him a letter from his predecessor, Barack Obama. In what has become a tradition as part of the peaceful transfer of power, the outgoing president leaves an encouraging note for the incoming chief executive congratulating him on taking office and offering advice. Trump said Obama’s letter was “beautiful” but that he wouldn’t tell anyone what it said. 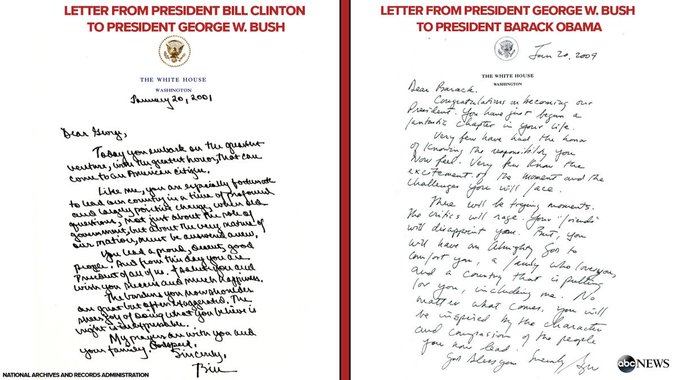 Text of the handwritten letters:

Dear Barack,
Congratulations on becoming our President. You have just begun a fantastic chapter in your life.
Very few have had the honor of knowing the responsibility you now feel. Very few know the excitement of the moment and the challenges you will face.
There will be trying moments. The critics will rage. Your “friends” will disappoint you. But, you will have an Almighty God to comfort you, a family who loves you, and a country that is pulling for you, including me. No matter what comes, you will be inspired by the character and compassion of the people you now lead.
God bless you.
Sincerely,
GW

Dear George,
Today you embark on the greatest venture, with the greatest honor, that can come to an American citizen.
Like me, you are especially fortunate to lead our country in a time of profound and largely positive change, when old questions, not just about the role of government, but about the very nature of our nation, must be answered anew.
You lead a proud, decent, good people. And from this day you are President of all of us. I salute you and wish you success and much happiness.
The burdens you now shoulder are great but often exaggerated. The sheer joy of doing what you believe is right is inexpressible.
My prayers are with you and your family. Godspeed.
Sincerely, Bill