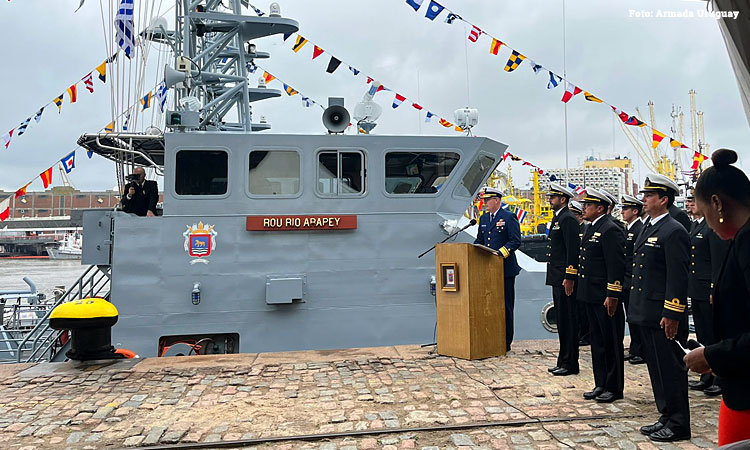 “The $8.69 million donation of these three modern patrol craft represent the largest single donation from the U.S. government to Uruguay in the 21st century,” said U.S. Embassy Montevideo Chargé d’Affaires Karl Rios, President Joe Biden’s representative in Uruguay. “Our Office of Defense Cooperation was founded here in our Embassy in 1951, and shortly thereafter we signed the Uruguay / U.S. Mutual Defense agreement in 1953. In 2020 our Uruguayan colleagues at the Ministry of Defense and Navy asked for U.S. cooperation on security issues that we face in our own waters: smuggling, border control, international fisheries law enforcement, and counternarcotics missions. This Protector Class donation is a tangible example of delivering on Uruguay’s request.”

U.S. Coast Guard Rear Admiral Douglas Schofield, Assistant Commandant for Acquisitions, and a team of three other personnel also visited Uruguay to mark the occasion of the arrival of the vessels. “I was very proud to be here to witness the arrival of the ships after a long journey from Baltimore, Maryland. Most impressive was the professionalism demonstrated by the Uruguay Navy crews as they brought the vessels from across the world,” said Admiral Schofield. “After many years working as professional mariner myself, I understand the challenge that these sailors faced as they stopped at 14 different ports, dodging hurricanes and tropical storms, and navigating on rough seas. The Uruguayan crews earned a reputation for their expertise and willingness to learn the new technologies of these vessels during the training they completed in Maryland with our Coast Guard. They proved this reputation by arriving safely here to Montevideo.”

The 87-foot (27 m) Protector Class vessels have a 900 NM (1,700 KM) range, a top speed of 25 knots, and served in the U.S. on missions including homeland security, combating drug smuggling, immigration enforcement, marine fisheries enforcement and search and rescue support. The ships are designed to accommodate crews of mixed gender with five separate small berthing spaces accommodating standard crews of ten, with maximum berthing for 12. Each ship includes a rigid hull inflatable boat (RHIB) that can be launched from the stern of the larger vessel via an innovative launch and recovery system. This capability allows for crews to quickly intercept, inspect and/or board other vessels while on patrol. The three specific vessels that Uruguay received were homeported in Connecticut, Virginia, and Florida.

The U.S. originally purchased 74 vessels, the last of which was delivered in 2009. The U.S. Department of Homeland Security announced in 2020 that eight Protector Class vessels would be decommissioned in 2021 due to budget re-alignments for the U.S. Coast Guard, allowing the service to deploy new Sentinel Class cutters, a much larger “deep water” vessel. The remaining 66 vessels remain in service patrolling the waters of the U.S.

“The significant upside to Uruguay acquiring these vessels is they will have access to purchase replacement parts and will be integrated into our training programs,” said Admiral Schofield. “The U.S. uses the ‘Total Package Approach’ to help ensure our partners can continue to use the material they invested in for decades to come. In fact, part of our visit here was to discuss the U.S. funding to send Uruguayan Navy personnel to the U.S. in 2023 and beyond so they can learn more about maintaining the engines and other systems on board the Protector ships as part of the International Military Education and Training (IMET) Program.”

The IMET Program is a unique way the U.S. builds cooperation and understanding with like-minded partner nations, coordinated via the U.S. Embassy’s Office of Defense Cooperation (ODC). The ODC works closely with the Uruguay military and government each year to provide the IMET courses that best serve Uruguay’s defense and security requirements. Uruguayan military and civilian personnel have completed more than 254 U.S.-based courses since 2016 via $6.35 million in donations by the U.S. government. The ODC’s military-to-military engagement also includes exercise participation, humanitarian assistance in response to the COVID-19 pandemic and other natural disasters, collaboration on peacekeeping operations, and measures to combat illegal, unregulated, and unreported fishing, all supporting the U.S. Embassy’s top bilateral priorities in Uruguay.

“This is my first visit to Uruguay, and I saw first-hand the long history of the Uruguayan Navy successfully maintaining and employing U.S. Coast Guard vessels, from the Cape Class patrol boats to the 44-foot Motor Lifeboat. In fact, had the opportunity to cruise the beautiful Rio de la Plata on one of these vessels” , shared Admiral Schofield.

“I commend the Uruguayan Navy on their efforts to secure their nation’s maritime sovereignty and I am glad that the Protector Class vessels are part of this long line of U.S. / Uruguay cooperation.”