Home Página Inicial | News & Events | Pompeo at OAS: “The United States is a friend of Venezuela and of the Venezuelan people” 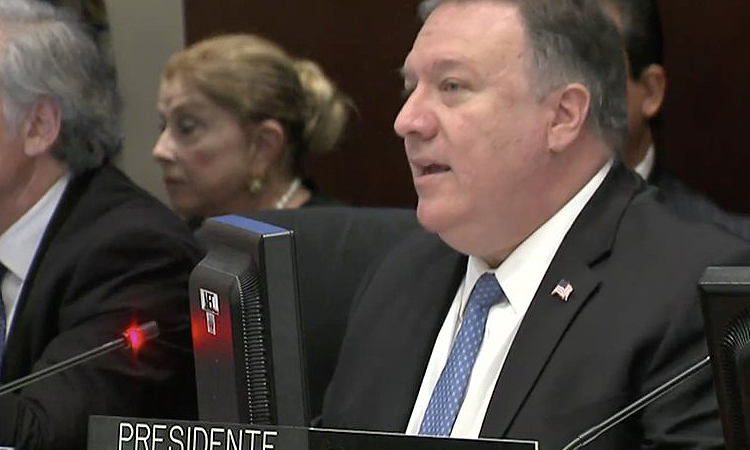 Remarks by Secretary of State Michael R. Pompeo at the Organization of American States

SECRETARY POMPEO:  Thank you very much.  The United States is a friend of Venezuela and of the Venezuelan people.  We have watched Venezuelans suffer for far too long.  We know what they know, that the tyranny of the now defunct Maduro regime has far too long – for far too long choked the country and its citizens.

Yesterday, in solidarity with the Venezuelan people, and out of respect for Venezuelan democracy, the United States proudly recognized National Assembly President Juan Guaido as the interim president of Venezuela.  You’ve seen the statements from President Trump and from myself.

Many other countries, including a number of OAS states, have also recognized the interim president.  We thank them for their support.

It’s now time for the OAS as an institution as a whole to do the same.  All OAS member states must align themselves with democracy and respect for the rule of law.  All member states who have committed to uphold the Inter-American Democratic Charter must now recognize the interim president.

In light of these facts, we call on Venezuelan security forces to ensure the protection of interim President Guaido’s physical integrity and his safety.  We’ve seen reports that a number of protesters were killed yesterday and that more than one hundred were arrested, so I reiterate our warning about any decision by remnant elements of the Maduro regime to use violence to repress the peaceful democratic transition.

The United States did not arrive at this conclusion overnight.  We came to this conclusion after a long and bitter experience and following a considered assessment of the facts.  And we’re not alone.  The OAS General Assembly has itself agreed to these facts.  In June of last year, the OAS General Assembly declared the re-election of former president Maduro an invalid sham.  This past January 10th, the OAS Permanent Council declared former president Maduro’s second term illegitimate.

In his public address, interim President Guaido also outlined the steps he plans to take to restore democracy to his country, including free, fair, transparent, and truly democratic elections.

The United States stands solidly behind him.  We stand ready to support the efforts of the National Assembly, the Venezuelan people, and the interim president to restore democracy and respect for the rule of law in Venezuela.

We also stand ready to provide humanitarian assistance to the people of Venezuela as soon as logistically possible.  Today, I am announcing that the United States is ready to provide more than $20 million in humanitarian assistance to the people of Venezuela.  These funds are to help them cope with the severe food and medicine shortages and other dire impacts of their country’s political and economic crisis.  Our announcement of aid is in response to a request from the National Assembly, led by the interim president.

As a friend of the Venezuelan people, we stand ready to help them even more, to help them begin the process of rebuilding their country and their economy from the destruction wrought by the criminally incompetent and illegitimate Maduro regime.

Our support for Venezuela’s democratic hopes and dreams is in sharp contrast to the authoritarian regimes across the globe who have lined up to prop up former President Maduro. And there is no regime which has aided and abetted Maduro’s tyranny like the one in Havana.  Maduro’s illegitimate rule was for years sustained by an influx of Cuban security and intelligence officials.  They schooled Venezuela’s secret police in the dark arts of torture, repression, and citizen control.  Maduro was a fine student at the Cuban academy of oppression.

We call on the OAS and all its member states to act on basic, decent, democratic principles and the incontrovertible facts on the ground.

Each of us – each of us – must live up to our calling to promote and defend democracy, as expressed in the tenets of the Inter-American Democratic Charter, to which everyone in this chamber is a signatory.

And we call on all our partners and responsible OAS member states to show leadership and pledge support for Venezuela’s democratic transition and for interim President Guaido’s pivotal role in that.

We – we each – have a critical opportunity to help the Venezuelan people live free once again.  I ask my colleagues to reconvene a meeting of foreign ministers to continue our conversation on the peaceful democratic transition for Venezuela.  History will remember whether we help them or not.  The United States calls on all nations of the OAS to make the right choice and make that right choice right now.  Thank you.   (Applause.)