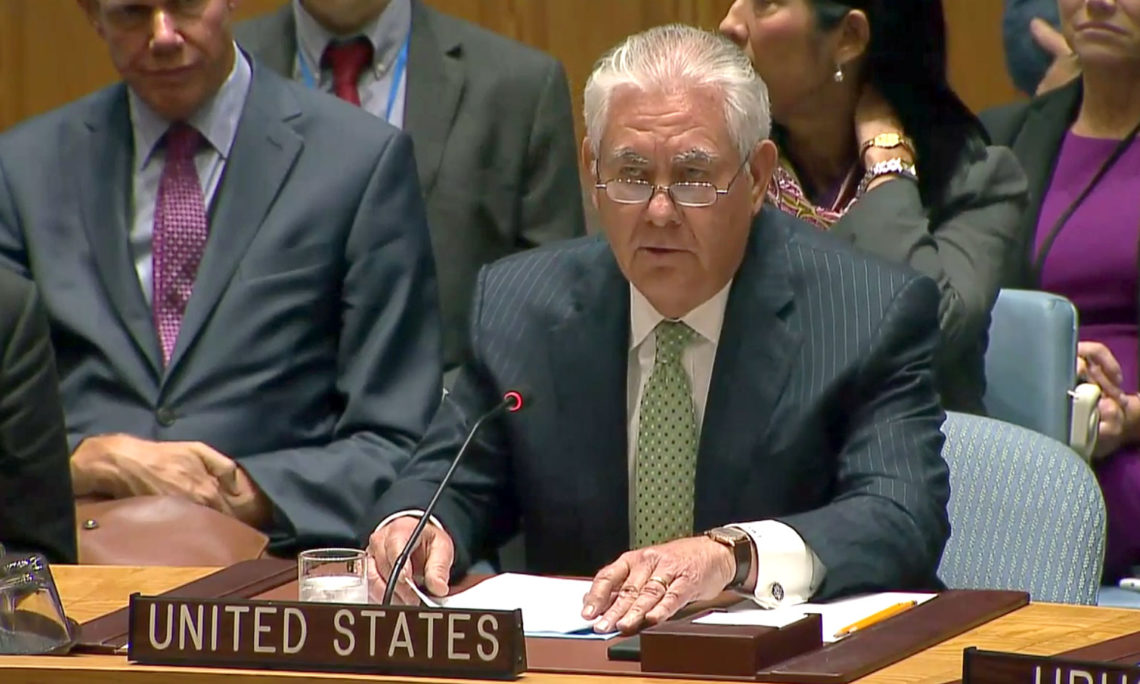 SECRETARY TILLERSON: Good afternoon and thank you for the opportunity to speak today. On behalf of the United States, I thank Japan and Foreign Minister Kono for convening this ministerial session on the growing threat from North Korea.

After its ICBM launch on November the 29th, the North Korean Government claimed that it now possessed the capability to strike any location in the continental United States. North Korea’s growing capabilities reflect a direct threat to our security and the security of the entire world. We do not regard this claim as an empty threat.

The North Korean regime’s continuing unlawful missile launches and testing activities signal its contempt for the United States, its neighbors in Asia, and all members of the United Nations.

In face of such a threat, inaction is unacceptable for any nation. Through a series of robust Security Council resolutions, this body has taken a leading role in condemning North Korea’s unlawful nuclear and missile programs and imposing consequences. The international community remains firm in our determination that we will not accept a nuclear North Korea.

Each UN member state must fully implement all existing UN Security Council resolutions. For those nations who have not done so, or who have been slow to enforce Security Council resolutions, your hesitation calls into question whether your vote is a commitment to words only, but not actions. For countries who have not taken action, I urge you to consider your interests, your allegiances, and your values in the face of this grave and global threat.

We believe that more can and must be done beyond enforcing the minimum requirements of the Security Council resolutions directed at the DPRK. Last spring, the United States initiated a peaceful pressure campaign of economic and diplomatic sanctions against North Korea, with the intent of setting conditions for North Korea to engage in serious negotiations toward the complete, verifiable, and irreversible abandonment of its nuclear weapons programs. Our resolve to continue this campaign is even greater today. Over the past year, many allies and partners of the United States have joined our campaign, going beyond mere compliance with the Security Council resolutions. We ask these nations to continue to increase pressure through unilateral action. Doing so will further isolate North Korea politically and economically, cutting off support and funds for its unlawful nuclear and missile programs.

We particularly call on Russia and China to increase pressure, including going beyond full implementation of the UN Security Council resolutions. Continuing to allow North Korean laborers to toil in slave-like conditions inside Russia in exchange for wages used to fund nuclear weapons programs calls into question Russia’s dedication as a partner for peace. Similarly, as Chinese crude oil flows to North Korean refineries, the United States questions China’s commitment to solving an issue that has serious implications for the security of its own citizens.

Recently the North Korean regime has sought to portray UN sanctions as harmful to women and children. But this is a regime that hypocritically spends billions on nuclear and ballistic missile programs while its own people suffer great poverty. The regime could feed and care for women, children, and ordinary people of North Korea if it chose the welfare of its people over weapons development. The DPRK has a choice: It can reverse course, give up its unlawful nuclear weapons program, and join the community of nations, or it can continue to condemn its people to poverty and isolation. The regime in Pyongyang bears the ultimate responsibility for the well-being of its people.

North Korea claims to undertake its nuclear weapons program as an essential step for the survival of its regime. In making this choice, North Korea has made itself less secure, and its economy has become further isolated and disconnected from the global economy.

We have been clear that all options remain on the table in the defense of our nation, but we do not seek, nor do we want, war with North Korea. The United States will use all necessary measures to defend itself against North Korean aggression, but our hope remains that diplomacy will produce a resolution. As I said earlier this week, a sustained cessation of North Korea’s threatening behavior must occur before talks can begin. North Korea must earn its way back to the table. The pressure campaign must, and will, continue until denuclearization is achieved. We will, in the meantime, keep our channels of communication open.

Our message today is one that this body has heard before, and one that we will continue to repeat: The United States will not allow the regime in Pyongyang to hold the world hostage. We will continue to hold North Korea accountable for its reckless and threatening behavior today and in the future. We ask every nation here to join us in exerting sovereignty to protect all of our people. We ask all to join a unified effort to achieve a complete and verifiable denuclearization of the Korean Peninsula.