Early in 2015, the Public Affairs Section of U.S. Embassy Montevideo teamed up with Montevideo’s Engineering Services Center (ESC) to launch an innovative Robot Diplomacy Program on how to build and program robots with the objective of promoting science and technology, social inclusion, and to encourage more women to be involved in STEM (Science, Technology, Environment and Mathematics) Education.

Dixon arrived with 10 Arduino robots in pieces, and throughout her presentation she helped students build their robots from scratch. The students worked in groups and by following the directions of this MIT engineer, they accomplished their task, not only building their robots, but also driving them around with a remote control.

With this program the Public Affairs Section promotes interest in sciences and technology among students from different educational centers.

This was the second time that the Embassy offered this workshop. The first one was presented during the week of the II Uruguayan Science Camp that took place in Minas, Lavalleja.

The Robot Diplomacy Program is part of a wider initiative called the Embassy Speakers Program that facilitates the interaction between professionals and American diplomats from diverse backgrounds with Uruguayan youth, seeking to ultimately encourage them to learn more about the English language and to foster understanding between both cultures. 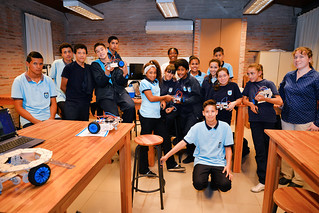