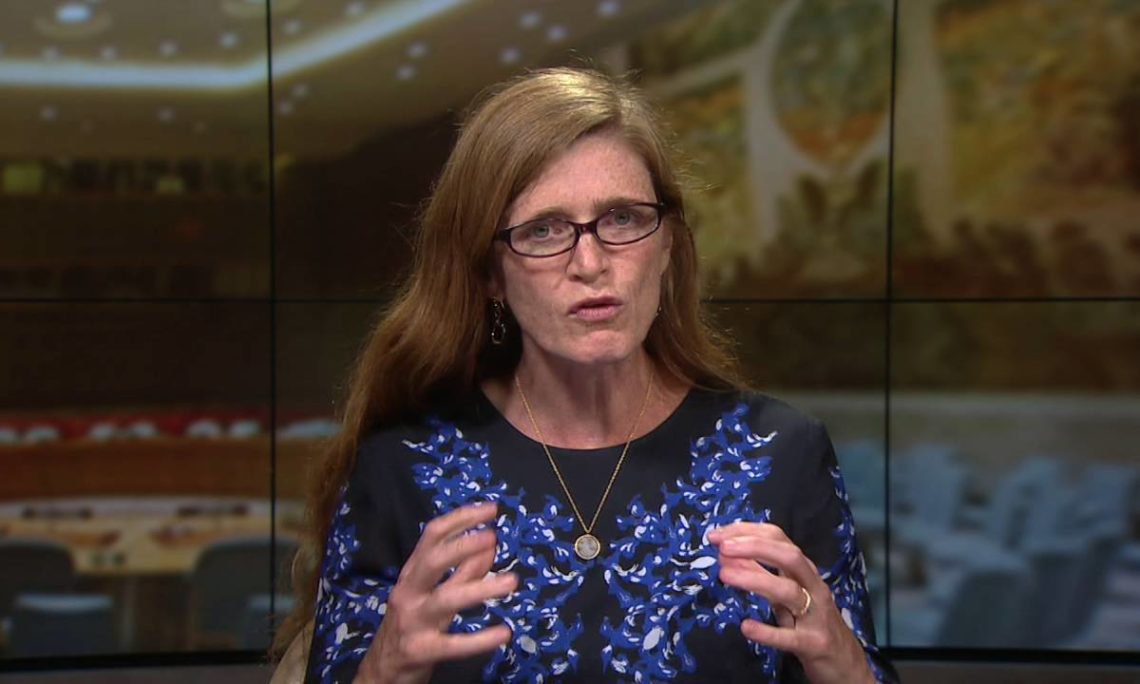 Ambassador Samantha Power: “Let me begin by thanking the government and civil society leaders chairing this conference: from Uruguay, Foreign Minister Nin Nova and Ovejas Negras; and from the Netherlands, Foreign Minister Koenders and COC-Netherlands.

I had planned to be in Montevideo with you, but unfortunately, the escalating violence in South Sudan has kept me here at the UN. Much as I regret missing the opportunity to meet many of you in person, I’m honored and incredibly humbled to be able to speak with you today. Being an advocate for LGBTI rights these days can feel almost schizophrenic.

While more than 50 countries worldwide now prohibit discrimination based on sexual orientation, more than 70 countries criminalize consensual same-sex conduct. In elections last month in the Philippines, voters elected both a Senator who called gay couples “worse than animals,” and the country’s first-ever transgender Representative. In Brazil, which has a proud history of pushing for LGBTI rights at home and abroad, including introducing the first-ever UN resolution, in 2003, to prohibit discrimination on the basis of sexual orientation – a monitoring group has documented nearly 1,600 killings of LGBTI people over the past four and a half years. That’s approximately one LGBTI killing per day in Brazil, every day, since 2012. And while same-sex couples now have the right to marry in all 50 American states, and people no longer have to hide who they love to serve in our nation’s military – you can still be fired from a job because of your sexual orientation, and an estimated 40 percent of trans people in the United States attempt suicide – approximately 30 times the national average.

You all know these ups and downs, because you live them day to day. Consider this very conference: while some civil society participants can live tweet and blog about the issues discussed here in real time, others have to keep their heads down, they have to keep a much lower profile, knowing that calling attention to their work here – or any of your efforts to advance LGBTI rights – could lead to harassment, imprisonment, or worse in their home countries.
To state the obvious: Governments do not have to choose between advancing LGBTI rights within their own countries and around the world. We can and must do both. How? First, we must be willing to use all the tools in our toolkit to shift the policies and attitudes of the governments that condone or even fuel discrimination and violence against LGBTI people.

Let me give you just one example: Last July, President Obama traveled to Kenya, a country where having a consensual same-sex relationship is punishable by up to 14 years in prison, and where a 2013 poll found that 90 percent of people think society should not accept homosexuality. Now, even before the President set foot in Kenya, protestors took to the streets to warn him not to bring the issue up. Their arguments will be familiar ones to many of you – including that the U.S. should not impose its views on people with different cultural and religious traditions. An argument, I would note, that the diversity of advocates in this room – the room you are in – clearly rebuts.

Here is how President Obama responded when asked about the issue at a press conference in Nairobi with Kenya’s president: he said, “I believe in the principle of treating people equally under the law…and that the state should not discriminate against people based on their sexual orientation…[W]hen you start treating people differently – not because of any harm they’re doing anybody, but because they’re different – that’s the path whereby freedoms begin to erode and bad things happen… And as an African-American in the United States, I am painfully aware of the history of what happens when people are treated differently, under the law.”

President Obama’s point was that there’s no legitimate alibi for violating basic human rights. Treating people differently because of who they are is always wrong. So while it is wise, and indeed necessary, to ask which tactics will be most effective in advancing equality – we can’t let the false justifications of culture, sovereignty, or anything else hold us back from fighting discrimination. That’s why we are not only standing up for LGBTI rights in public  statements, but also through other means, such as the diplomatic efforts of our nation’s first-ever Special Envoy for the Human Rights of LGBTI persons, the great Randy Berry, who is with you in Montevideo and has gotten to know many of you in his travels to 43 countries.

Second, we must work to integrate LGBTI rights into the DNA of multilateral bodies like the UN. It may seem self-evident that the institution whose Universal Declaration of Human Rights affirms that “everyone is entitled to all rights and freedoms…without distinction of any kind” would fight against discrimination based on sexual orientation and gender identity; yet too often, throughout history, it has not. Here are a few ways we and partners, many of whom are in the room there, have worked to change that record in the last few years. In 2011 and 2014, we worked with partners on the UN Human Rights Council to pass resolutions compelling the Council to systematically document LGBTI rights violations around the globe – a key step toward breaking the pattern of impunity for such abuses.

In August of 2015, we co-chaired the first-ever UN Security Council meeting focused on LGBTI rights – on the persecution of LGBTI people by ISIL. In doing so, the world’s foremost enforcement body for peace and security signaled that it is wrong to violate people’s rights because of who they love. Just last month, as you know, a Latin American led resolution created the first-ever permanent Independent Expert at the UN to provide consistent reporting on violence and discrimination based on sexual orientation and gender identity – an initiative that 628 NGOs from over 150 countries rallied behind. When a group of countries tried to block the effort – calling it reckless and arrogant, and even calling for a vote to strip the resolution of its title – those same Latin American countries vigorously beat back those efforts.

Of course, these steps have not yet succeeded in stopping widespread discrimination and violence against LGBTI people. But with each of these “firsts,” we weave another thread of LGBTI rights into the fabric of universal human rights, and we chip away at the misconception that LGBTI rights are somehow subordinate to other human rights. None of these are steps that we have taken alone; in each instance, we’ve worked with a coalition made up of countries from the global North and South. I will never forget the words of my Chilean counterpart at the UN when I asked if his country would co-sponsor the Security Council’s session on LGBTI rights, again, an unprecedented occurrence. He said: “We are with you. We may be all alone, but we are with you.” In the end, thankfully, we were not all alone.

And we’ve had to defend virtually every one of our collective gains working with partners – governmental partners and Civil Society partners. Consider the UN Secretary-General’s 2014 laudable decision to extend benefits to the families of all UN employees, including same-sex couples. In March 2015, Russia launched an effort to try to strip these benefits, which would have sent a totally devastating message that LGBTI families do not deserve equal rights within the UN’s own house. We and our partners fought that effort vigorously, and in the end we succeeded. Out of 193 countries, only 43 voted with Russia.

Now, I recognize the obstacles that we governments must overcome – and the risks that we face – pale in comparison to those confronting many activists here. And that is precisely why governments at this conference, as well as those not at this conference, must do much more to support you. Let me conclude. Prior to Orlando, the worst mass killing of LGBTI people in the United States occurred in 1973, in New Orleans, when a gay club called the UpStairs Lounge was firebombed, killing 32 people trapped inside. The story made front page news in the local newspaper, which described the grisly scene in detail, but not one of its many stories mentioned that the attack had targeted a gay club. And though it was the worst fire in the city’s modern history, local officials made no public statements, nor did national politicians. Multiple churches refused to hold services for the victims, and no one was ever prosecuted for this heinous crime.

Compare that to the response to the horrific attack in Orlando, where, in the words of a doctor who treated the injured, “after the worst of humanity reared its evil head…the best of humanity came roaring back.” First responders rushed to the scene. Residents lined up for hours to donate blood. The city and our nation mourned. At the U.S. Mission to the UN, we had to put out four condolence books – because so many representatives of other governments came to write messages of solidarity. In many of your countries, you participated in vigils and other public shows of support. Perhaps most moving were the stories of the 49 individual victims, which have revealed the beautiful diversity of just a small sliver of the LGBTI community – from the Army reservist, to the travel agent who organized international tours for LGBTI people, to the young man who, in 2003, was the only person brave enough to come out in his high school of 2,500 people. As President Obama said after meeting with relatives of the victims, “These families could be our families. In fact, they are our family.”

That is the difference 43 years has made. That is the difference when a society moves from one where existence of LGBTI persons is not even acknowledged – much less embraced – to one where we are finally recognizing LGBTI rights as human rights. Our work – the work of governments and of civil society – will not be finished until LGBTI people are welcome in every nation, every community, and every family.