Home Página Inicial | News & Events | In light of the COVID-19 pandemic, SOUTHCOM Humanitarian Assistance in Uruguay and the region shows friendship and focuses on vulnerable populations 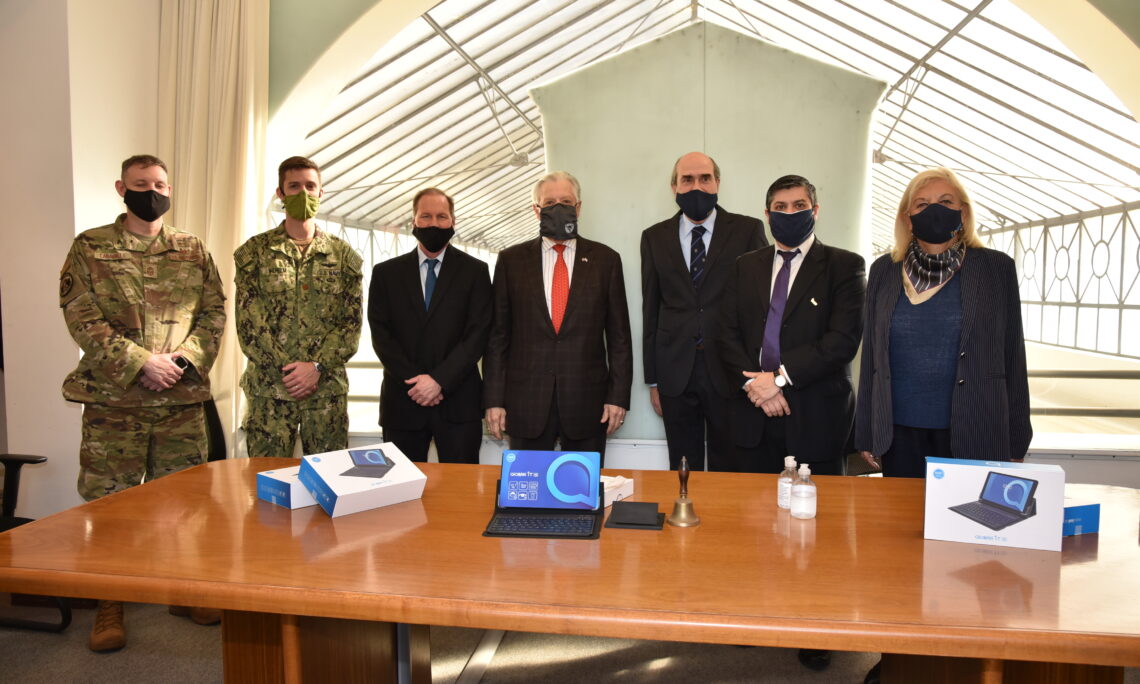 The U.S. Office of Defense Cooperation has executed almost 10 million dollars from the U.S. Southern Command (SOUTHCOM) in construction projects in Uruguay over the last 20 years. About 1.7 million dollars have been given just to strengthen Uruguay’s response capabilities in light of the COVID-19 pandemic.

The Office of Defense Cooperation of the U.S. Embassy in Uruguay is constantly working on building and strengthening bonds and institutional ties that make it possible to promote the security, stability, and prosperity of Uruguayan citizens through a wide array of programs, donations, and exchange initiatives. The COVID-19 pandemic was not the exception, since the United States and Uruguay worked from the beginning to enhance response capabilities throughout the country.

From the moment the Uruguayan government declared the state of health emergency in March until now, SOUTHCOM, through its Humanitarian Assistance Program (HAP), made eight donations of medical equipment to clinics, hospitals, and Uruguay’s National Emergency System (SINAE) to cooperate with the Uruguayan government’s response plan to COVID-19. The donations, which were made in different stages, included blood scanners, vital signs monitors, ICU beds for hospitals, and personal protective equipment for hospitals and clinics. The most recent donation consisted of 88 tablets so children and adolescents from Uruguay’s National Institute for Children and Adolescent Affairs (INAU) can study remotely during the pandemic. The tablets were presented by U.S. Ambassador to Uruguay, Mr. Kenneth S. George, to the President of INAU, Dr. Pablo Abdala, last August.

During the event, which was held at the INAU headquarters, Ambassador George said it is important to help young people reach their academic goals despite the challenges posed by the pandemic. “We are proud to be delivering these 88 tablets today, which will allow children and adolescents who receive care at INAU centers throughout the country to continue with their studies in spite of the pandemic,” Ambassador George said during his remarks. “The COVID-19 pandemic has had a particular impact on children and adolescents who do not have parents or other adults taking care of them, or who live in vulnerable situations. This assistance from SOUTHCOM will allow these children to continue participating in the educational process.” Ambassador George participated in person of many of the donations delivered to the Uruguayan government with funds from SOUTHCOM’s HAP. “We are proud to be part of Montevideo’s community and we are all in this together,” George said at one of the events. “As part of our shared values, we look forward to the opportunity to continue strengthening our joint work for the benefit of Uruguayan children and other vulnerable citizens,” he said.

During the pandemic, Ambassador George, as well as members of the Embassy’s Office of Defense Cooperation, have had the privilege of meeting Uruguayan government authorities and health care leaders to talk and exchange opinions, reiterating and reinforcing the U.S. government’s commitment to provide assistance to all of its partners and friends in the Western hemisphere, particularly during times of global uncertainty.

(Air Force) Colonel Gary Symon, Senior Defense Officer from the U.S. Embassy’s Office of Defense Cooperation in Uruguay, expressed his satisfaction with the advances of the many examples of U.S. assistance to Uruguay through SOUTHCOM’s HAP.

“We are committed to keep assisting the already extremely effective efforts made by Uruguay to fight against COVID-19 through SOUTHCOM’s HAP. We are proud to be working side by side with our Uruguayan friends and neighbors.”
Col. (Air Force) Gary Symon, Senior Defense Officer from the U.S. Embassy’s Office of Defense Cooperation in Uruguay

In addition, Colonel Symon pointed out that the joint work done since the pandemic reached Uruguay is just the most recent example of SOUTHCOM’s HAP in the country. During the last 20 years, the Office of Defense Cooperation has managed over 9 million dollars in construction projects in Uruguay, including a medical and dentistry clinic that opened in Santa Catalina (Cerro) in 2007, and renovation work done at the Artigas Youth Center (Salto) to make it accessible. These renovations were presented in April 2010, and they included building an accessible pool, renovating lockers, bathrooms, and running track, and renovating the ring at the Equestrian Center. The work done with SOUTHCOM funds at this center allowed it to host the first regional paralympic games in October 2010. Other projects highlighted by SDO Col. Symon were the construction of a warehouse for SINAE to use in case of disasters, which opened in 2011, the construction of a medical and dentistry clinic in Chapicuy (Paysandú) for 1.5 million dollars, and the historic donation of 3.2 million dollars to build a kitchen and industrial laundry rooms at the CEREMOS Center (former Etchepare) in San José, which opened in 2018.

“These donations represent the friendship and commitment of the United States with Uruguay and the Uruguayan people. Our citizens share values and have a shared history. It is an honor for all of us to assist our neighbors in Uruguay during these trying times we are all facing.”
U.S. Ambassador to Uruguay Kenneth S. George

Between 2006 and 2020, and also thanks to SOUTHCOM’s HAP, the Montevideo Emergency Operation Center was renovated, and the Office of Defense Cooperation worked together with SINAE authorities to renovate and equip 11 more emergency operation centers throughout the country. The people of the United States donated a fire truck worth almost 500,000 dollars in 2011, and arrangements were made for the delivery of smaller donations to schools, clinics, hospitals, orphanages, and shelters for women and girls. Construction materials were also donated for repair work after the tornado that hit the city of Dolores in 2016.

When reviewing this recent history of assistance provided by the people of the United States to the people of Uruguay, Ambassador George pointed out that “These donations represent the friendship and commitment of the United States with Uruguay and the Uruguayan people. Our citizens share values and have a shared history. It is an honor for all of us to assist our neighbors in Uruguay during these trying times we are all facing.”

About the U.S. Southern Command

The U.S. Southern Command manages the Humanitarian Assistance Program (HAP) in Central and South America and the Caribbean. The purpose of this program is tending to the basic humanitarian needs of citizens in these regions, including disaster response and relief, projects, and activities connected to health care and support to primary education. Donations are only made to government programs or agencies, not private institutions. All donations in Uruguay are arranged by the Office of Defense Cooperation and the team of the U.S. Embassy in Uruguay.

SOUTHCOM’s efforts in the hemisphere vary according to the different needs. In Jamaica, for instance, SOUTHCOM recently donated and equipped a field hospital that can house up to 70 patients to be treated during the pandemic, looking to strengthen the capabilities of the Jamaican government to respond to the COVID-19 pandemic. The field hospital was flown to Kingston from Joint Base Charleston in South Carolina.  In addition to Uruguay and Jamaica, the following countries have also received assistance from the United States through SOUTHCOM’s Humanitarian Assistance Program: Antigua and Barbuda, Argentina, Barbados, Bolivia, Brazil, Chile, Colombia, Costa Rica, Curaçao, Dominican Republic, Ecuador, El Salvador, Grenada, Guatemala, Guyana, Haiti, Honduras, Panama, Paraguay, Peru, St. Kitts and Nevis, St. Lucia, St. Vincent and the Grenadines, Suriname, and Trinidad and Tobago.