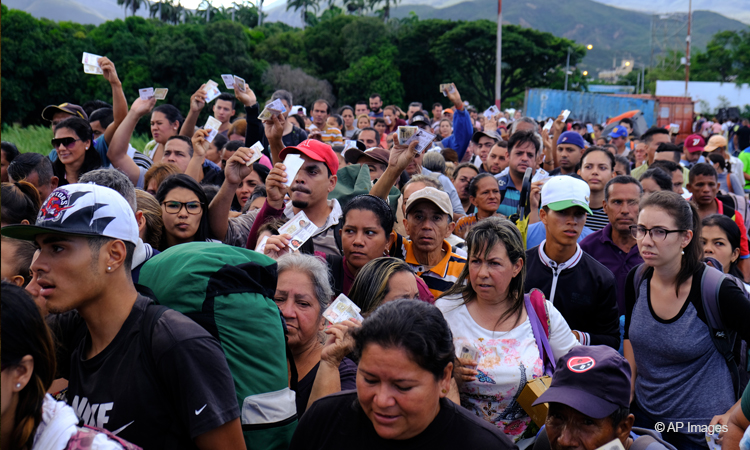 State Department: We Will Continue To Apply Pressure On The Maduro Regime

When I first began to work on Latin American affairs almost 40 years ago, Venezuela was one of the few democracies in Latin America. It was not only the birthplace of Simon Bolívar, but a strong supporter of struggling democratic movements throughout Latin America, and it took in migrants and refugees from across the Western Hemisphere and Europe.

But in Venezuela today, severe shortages of food, medicine, and clean water are worsened by repeated electrical blackouts. A lack of jobs and million-percent hyperinflation mean crushing poverty, and increasing regime oppression prevents the exercise of basic human rights. Venezuela is now a source of migrants and refugees.

During the week of April 30, the world witnessed the Venezuelan people attempting to put the country back on a constitutional path. The majority of Venezuelans, including members of the regime’s inner circle and top military and intelligence officers, have lost faith in Maduro’s ability to govern.

Cracks within Maduro’s regime are multiplying and widening, and his time is running out. He cannot solve or even ameliorate the desperate problems that plague Venezuela’s people.

His solution is simply more repression and a brutal effort to destroy the last democratic institution in Venezuela, the National Assembly—as we saw when its First Vice President, Edgar Zambrano, was jailed on May 8th.

Venezuelans must be able to come together and take the decisions facing their country through free and fair elections that reflect the will of the majority, not just the corrupt few who hold power.

All democratic parties and factions will need to come together and develop a framework for transition that leads to such elections. And it’s the National Assembly, as the only elected body provided for in the Venezuelan constitution, that can best manage this process.

We fully support the work it is doing to develop a transitional framework in which all Venezuelans have a voice.

Chavistas have a decision to make. Will they allow their party to be only the party of Maduro and of the illegitimate and unconstitutional National Constituent Assembly? Or will Chavistas stand for democracy, and allow the people of Venezuela to freely elect their political leaders? For those Chavista National Assembly members who left the body, the most important step they can take to reverse Venezuela’s political crisis is to return to the National Assembly and take their seats.

There they can advocate for their ideas and ideals within the institutional framework the Venezuelan Constitution provides.

Both opposition and Chavista voices are essential for a peaceful transition and national reconciliation. Like all of the country’s citizens, Chavistas will need to play a role in rebuilding Venezuela. At its best, Chavismo stood for the inclusion of Venezuelan voices that had traditionally been excluded from the national conversation. But if Chavismo is to be part of Venezuela’s future, it must be truly democratic and cannot be imposed by force.

The goal of U.S. policy is clear: to help Venezuelans who are striving to return their country first to democracy and the rule of law and then to prosperity.

Recovery can only start when the government respects the rights of all Venezuelans, irrespective of political party, wealth, or connections. When these conditions are satisfied, Venezuela’s talented population will have the strong support of the international community as a new and legitimate government begins the long process of recovery from Maduro’s mismanagement and kleptocracy.

Maduro and his cronies stole tens of billions from the Venezuelan people, but Venezuela still has its vast oil reserves as a basis for recovery.

Not many years ago, the country had thriving businesses that created high quality and well-paying jobs. What stands between the people of Venezuela and a brighter future? The regime of Nicolás Maduro.

We will continue to apply pressure on the Maduro regime and those enabling its repressive tactics, including Russia and Cuba. We will continue supporting democratic actors and the Venezuelan people.

The United States is certain Venezuelans will persevere in building a country that is democratic, prosperous, and reconnected to the world. We remain committed to helping them achieve this.

But to get there, Venezuela needs a peaceful transition decided upon by all its people. Now is the time for Venezuelans who are committed to a democratic future to join forces to make this new Venezuela a reality.