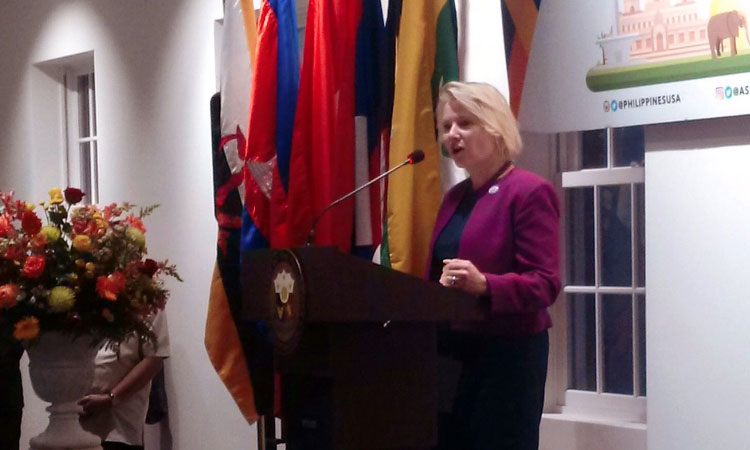 Susan A. Thornton: Chairman Royce, Ranking Member Engel, and Members of the Committee:

Thank you for the opportunity to appear before you today for this timely hearing on North Korea. Thank you also for your attention to the North Korea threat and how the United States is addressing it.

The threat posed by North Korea’s ballistic missile and nuclear weapons and other weapons of mass destruction (WMD) program is gravely serious, and one that warrants immediate and urgent attention, as this Administration has provided. The test of a nuclear device on September 3, North Korea’s sixth nuclear test, is an unacceptable provocation that ignores repeated calls from the international community for a change in North Korea’s behavior. It followed the August 28 ballistic missile launch that overflew portions of Hokkaido, which underscored the direct threat posed by Pyongyang’s missile and nuclear programs. It is the first declared ballistic missile overflight of Japan, and represents a clear and tangible threat to the security of Japan and the entire East Asia region. Let me emphasize that we continue to stand with our allies, Japan and South Korea, in the face of this escalating threat.

Since the beginning of 2017 alone, North Korea has launched more than fifteen ballistic missiles into the seas around it, including two ICBMs. In 2016 it tested two nuclear devices. And of course, North Korea has made a number of dramatic threats regarding its ability to hit specific targets including Guam and other parts of the United States. Secretary of Defense Mattis has made clear that we have the ability to defend ourselves and our allies – South Korea and Japan – from any attack and that our commitments to our allies remain ironclad.

We cannot allow such flagrant violations of international law to continue. We must hold Pyongyang to account.

This administration has developed a clear strategy for doing just that. The strategy involves forging an all-encompassing international coalition to apply diplomatic, economic, and political pressure on North Korea to bring the regime to understand the only path to peace, prosperity and international acceptance is to cease its provocative actions and to abandon its destabilizing missile and nuclear programs.

We have used different monikers for this strategy – “maximum pressure,” “peaceful pressure,” and “strategic accountability,” but the strategy’s components are the same: (1) We continue to push for strong multilateral sanctions against the DPRK at the United Nations. Through this forum, we are galvanizing the international community to stand together in rebuke of North Korea’s belligerent acts and to pressure Pyongyang to abandon its unlawful programs. (2) We are using the authorities granted in our domestic law under the North Korean Sanctions and Policy Enhancement Act and the new authorities under the Countering America’s Adversaries Through Sanctions Act to impose sanctions on individuals and entities that enable the DPRK’s illicit activities, deterring such conduct and sending a strong signal to the regime that we’re watching their movements. (3) We continue to press countries around the world to fully implement UN Security Council Resolutions against North Korea – including UNSCRs 2270, 2321, 2356, and 2371, and to consider harmonizing their domestic sanction regimes with our designations on North Korean and third-country entities (4) Likewise, we continue to urge the international community to cease normal political interactions with the DPRK, including by suspending or downgrading diplomatic relations with North Korea and ending diplomatic visits and exchanges. (5) Finally, we continue to call for all countries to cut trade ties with Pyongyang to increase North Korea’s financial isolation and choke off revenue sources – both licit and illicit – that finance the regime’s weapons programs.

Even as we pursue denuclearization, deterrence is also a central part of our DPRK strategy. We are fully committed to the defense of the United States and our allies and are ready to respond to any DPRK attack. We have partially deployed THAAD to the ROK and continue to take other measures to prepare ourselves, South Korea, and Japan to respond to any DPRK attack with overwhelming force. We must be unequivocal in our messaging to North Korea that any attack on the United States or our allies will be met with an overwhelming response.

Throughout our execution of this strategy, we have been clear about what our strategy is not: We are not seeking regime change or collapse. Nor do we seek an accelerated reunification of Korea, or an excuse to send troops north of the Armistice Agreement’s Military Demarcation Line. We have no desire to inflict harm on the long-suffering North Korean people, whom we view as distinct from the hostile regime in Pyongyang.

We recognize that the success of the pressure strategy will depend on cooperation from international partners, especially Beijing. We are working closely with China to execute this strategy and are clear-eyed in viewing the progress – growing if uneven – that China has made on this front. We are conferring closely with our Chinese counterparts to ensure strict implementation of China’s commitment to curb imports of North Korean coal, iron, iron ore, lead and lead ore, and seafood. If fully implemented UNSCR 2371’s ban on these items could substantially reduce DPRK revenues this year from the $1.5 billion North Korea earned from the export of these items to China in 2016.

We continue to work with China and Russia to improve the implementation of sanctions, but there is more to be done. Secretary Tillerson said it best when he called China’s support for the pressure campaign “notable, but uneven.” We hope to work with China and Russia to resolve this issue and will continue to engage in a dialogue on how to further pressure the DPRK. We have also made clear that if China and Russia do not act, we will use the tools we have at our disposal. Just last month we rolled out new sanctions targeting Russian and Chinese individuals and entities supporting the DPRK. We will continue to take action multilaterally and unilaterally to disrupt North Korea’s illicit activities wherever they are located.

While there is more work to be done, we see encouraging signs of progress from our partners around the globe on increasing pressure on North Korea:

Unfortunately, despite the way the international community has come together to pressure the DPRK, we have yet to see a notable change in DPRK’s dangerous behavior or any signs that it is willing or interested in credible talks on denuclearization at this stage. Our military, together with our allies, remains prepared to respond immediately and resolutely to any attack or threat of attack. There should be no doubt about our resolve to defend our allies and our homeland. We will not ape Pyongyang’s well-honed practice of carelessly and needlessly escalating tensions, but we are ready to respond if necessary. Meanwhile, we remain open to diplomacy, but the DPRK must show it is ready for serious engagement. We have not seen any such indication. In fact, each ballistic missile launch from North Korea – to say nothing of its most recent nuclear test – only signals the opposite. As a result, we will continue to urge countries around the world to take actions to make clear to the DPRK that its behavior is intolerable, and continue to build pressure.

We will step up efforts to sanction individuals and entities enabling the DPRK regime, irrespective of location or nationality. Following the nuclear test, we are pressing hard for a new Security Council Resolution, which we hope will include new sectoral sanctions, including oil, textiles, and workers. Countries like China and Russia must continue to exert their unique leverage over the DPRK. We will never recognize North Korea as a nuclear state.

We will continue to stand with our allies in the region and will work with Japan and South Korea. We are enhancing U.S.-Japan-ROK trilateral diplomatic and security cooperation. We will continue to work within our alliances to develop additional defense measures to answer the threat posed by the DPRK’s nuclear and ballistic missile programs, and to protect the people of the United States, Japan, and the Republic Korea. Third parties will not deter us from taking appropriate defensive measures in the face of the DPRK’s growing security challenge.

While addressing the nuclear and ballistic missile threat is our most pressing issue, we have not and will not lose sight of the plight of the three remaining U.S. citizens who have been unjustly detained by North Korea nor of the regime’s egregious human rights violations. Due to mounting concerns over the serious risk of arrest and long-term detention, the Department imposed a travel restriction on all U.S. nationals’ use of a passport to travel in, through, or to North Korea which went into force September 1. We seek to prevent the future detentions of U.S. citizens by the North Korean regime to avoid another tragedy like that which Otto Warmbier and his family endured. We will continue to press for accountability for those involved in such deplorable abuses.

We will also continue to reiterate our willingness to solve this issue through diplomacy. If the DPRK indicates an interest in serious engagement, we will explore that option, but we will do so with clear eyes about the DPRK’s past track record of violating the spirit and the letter of negotiated agreements.

We appreciate the strong interest in this issue from Congress, and we look forward to continuing our cooperation. Thank you for inviting me to testify today. I am pleased to answer any questions you may have.