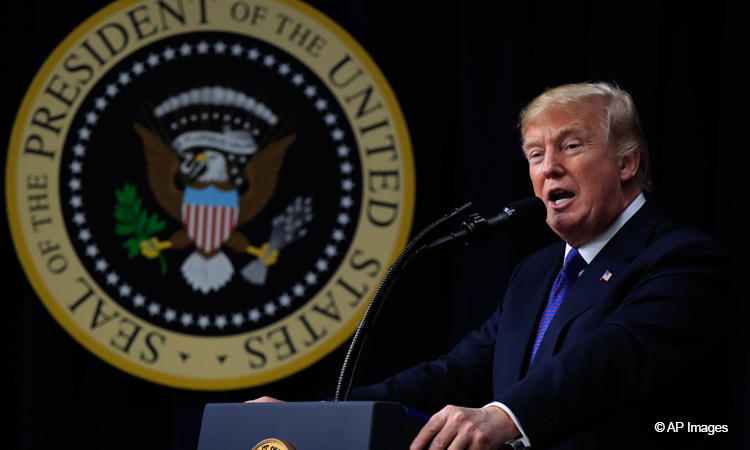 The White House
Office Of The Press Secretary

Statement by the President on the Iran Nuclear Deal

The Iranian regime is the world’s leading state sponsor of terror. It enables Hezbollah, Hamas, and many other terrorists to sow chaos and kill innocent people. It has funded, armed, and trained more than 100,000 militants to spread destruction across the Middle East. It props up the murderous regime of Bashar al Assad, and has helped him slaughter his own people. The regime’s destructive missiles threaten neighboring countries and international shipping. Within Iran, the Supreme Leader and his Islamic Revolutionary Guard Corps use mass arrests and torture to oppress and silence Iran’s people. Iran’s ruling elite has let their citizens go hungry while enriching themselves by stealing Iran’s national wealth.

Last October, I outlined to the American people—and to the world—my strategy for confronting these and other destructive activities. We are countering Iranian proxy wars in Yemen and Syria. We are cutting off the regime’s money flows to terrorists. We have sanctioned nearly 100 individuals and entities involved with the Iranian regime’s ballistic missile program and its other illicit activities. Today, I am adding 14 more to the sanctions list. We are also supporting the brave Iranian citizens who are demanding change from a corrupt regime that wastes the Iranian people’s money on weapons systems at home and terrorism abroad. And crucially, we are calling on all nations to lend similar support to the Iranian people, who are suffering under a regime that is stifling basic freedoms and denying its citizens the opportunity to build better lives for their families—an opportunity that is every human being’s God-given right.

All this stands in stark contrast to the policy and actions of the previous administration. President Obama failed to act as the Iranian people took to the streets in 2009. He turned a blind eye as Iran built and tested dangerous missiles and exported terror. He curried favor with the Iranian regime in order to push through the disastrously flawed Iran nuclear deal.

I have been very clear about my opinion of that deal. It gave Iran far too much in exchange for far too little. The enormous financial windfall the Iranian regime received because of the deal—access to more than $100 billion, including $1.8 billion in cash—has not been used to better the lives of the Iranian people. Instead, it has served as a slush fund for weapons, terror, and oppression, and to further line the pockets of corrupt regime leaders. The Iranian people know this, which is one reason why so many have taken to the streets to express their outrage.

Despite my strong inclination, I have not yet withdrawn the United States from the Iran nuclear deal. Instead, I have outlined two possible paths forward: either fix the deal’s disastrous flaws, or the United States will withdraw.

I am open to working with Congress on bipartisan legislation regarding Iran. But any bill I sign must include four critical components.

First, it must demand that Iran allow immediate inspections at all sites requested by international inspectors.

Second, it must ensure that Iran never even comes close to possessing a nuclear weapon.

Third, unlike the nuclear deal, these provisions must have no expiration date. My policy is to deny Iran all paths to a nuclear weapon—not just for ten years, but forever.

If Iran does not comply with any of these provisions, American nuclear sanctions would automatically resume.

Fourth, the legislation must explicitly state in United States law—for the first time—that long-range missile and nuclear weapons programs are inseparable, and that Iran’s development and testing of missiles should be subject to severe sanctions.

In 2015, the Obama Administration foolishly traded away strong multilateral sanctions to get its weak nuclear deal. By contrast, my Administration has engaged with key European allies in seeking to secure a new supplemental agreement that would impose new multilateral sanctions if Iran develops or tests long-range missiles, thwarts inspections, or makes progress toward a nuclear weapon—requirements that should have been in the nuclear deal in the first place. And, like the bill I expect from Congress, these provisions of a supplemental agreement must never expire.

I also call on all our allies to take stronger steps with us to confront Iran’s other malign activities. Among other actions, our allies should cut off funding to the Islamic Revolutionary Guard Corps, its militant proxies, and anyone else who contributes to Iran’s support for terrorism. They should designate Hezbollah—in its entirety—as a terrorist organization. They should join us in constraining Iran’s missile development and stopping its proliferation of missiles, especially to Yemen. They should join us in countering Iran’s cyber threats. They should help us deter Iran’s aggression against international shipping. They should pressure the Iranian regime to stop violating its citizens’ rights. And they should not do business with groups that enrich Iran’s dictatorship or fund the Revolutionary Guard and its terrorist proxies.

Today, I am waiving the application of certain nuclear sanctions, but only in order to secure our European allies’ agreement to fix the terrible flaws of the Iran nuclear deal. This is a last chance. In the absence of such an agreement, the United States will not again waive sanctions in order to stay in the Iran nuclear deal. And if at any time I judge that such an agreement is not within reach, I will withdraw from the deal immediately.

No one should doubt my word. I said I would not certify the nuclear deal—and I did not. I will also follow through on this pledge. I hereby call on key European countries to join with the United States in fixing significant flaws in the deal, countering Iranian aggression, and supporting the Iranian people. If other nations fail to act during this time, I will terminate our deal with Iran. Those who, for whatever reason, choose not to work with us will be siding with the Iranian regime’s nuclear ambitions, and against the people of Iran and the peaceful nations of the world.