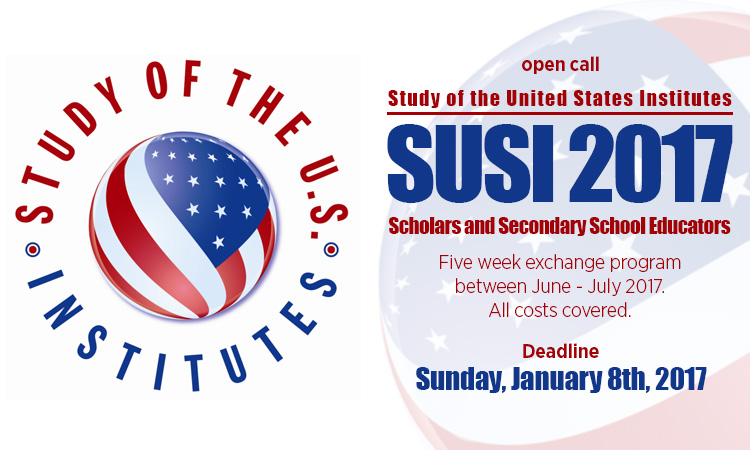 SUSI is designed as an intensive five/six-week post-graduate level academic program with integrated study tours hosted at U.S. universities for multinational professional groups (see eligibility criteria below) that will take place in June/July 2017.

The program’s purpose is to provide foreign scholars and secondary educators from countries worldwide with a deeper understanding of American society, education, culture, and institutions, past and present, in order to strengthen curricula and improve the quality of teaching about the U.S. in college, university, and secondary school classrooms abroad.

The institutes will take place at various colleges and universities throughout the United States over the course of five to six weeks beginning in June/July 2017.

You are encouraged to visit the Exchanges.state.gov website to obtain general information about the Institutes:

The following factors will be used in selecting participants from among the nominations.
The Department of State and the U.S. Embassy in Montevideo would like to emphasize that the clarity with which each candidate and their applications address each of these factors strongly affects a candidate’s chance of selection.

Candidates MUST complete and send the Application Form no later than Sunday, January 8, 2017.
Applications received after the deadline will not be considered.

To apply for one of these Institutes:
– U.S. Culture and Society
– U.S. Political Thought
– Contemporary American Literature
– U.S. Foreign Policy
– Journalism and Media
– Religious Pluralism in the U.S.

We look forward to receiving your nominations. Thank you.

NOTE: By applying for this program, you agree (if selected as a finalist or alternate) to have your name included in any official embassy publications including but not limited to:  press releases, email notifications and the official embassy website, Facebook Page, Twitter feed, and YouTube site.

This FAQ section addresses some commonly asked questions by posts.  If you cannot find an answer to your question please contact the program officer for the Scholar Institute(s) for which you wish to nominate.

What degree of English proficiency should a nominee have? All participants must be fully proficient in English; throughout the Institute they will need to fully understand lectures, actively participate in discussions, and read and write assignments in English.