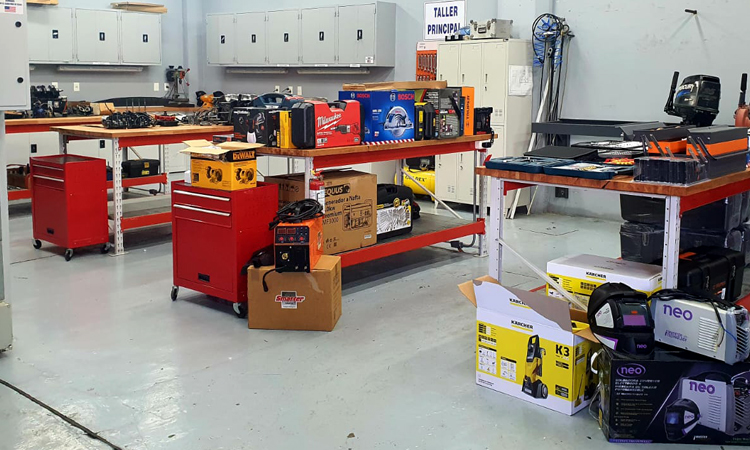 On June 1 st , 2022, members of the Office of Defense Cooperation and Political Section from the U.S. Embassy donated tools to the Uruguayan Navy’s small boat workshop at the base in the Port of Montevideo. The donation was accepted on behalf of Uruguay by Rear Admiral Mario Diego Vizcay Idiarte and Captain Diego Perona of the Uruguayan Navy. The donations will directly support the maintenance operations and enhance maintenance capabilities for future
peacekeeping operations assigned to the Uruguay Navy’s maritime and riverine ready units.

The tools will be used in the small boat workshop the Uruguayan Navy currently uses to repair different small boat components in their fleet. Both the tools and the workshop were funded via the U.S. government’s Global Peace Operations Initiative. The new tools will help the soldiers conduct maintenance and repairs in a more efficient manner and will also be used to help facilitate the training of new soldiers on different types of boat repairs and maintenance techniques.

This donation is part of a larger effort by the U.S. government to partner with Uruguay on peacekeeping missions via the United Nations and the U.S. Department of State.  In the past 10 years, the United States donated more than US $27 million to support Uruguay’s Air Force, Army, and Navy peacekeeping
deployments, including engineering construction equipment, patrol boats, communications and safety systems, vehicles, tools, simulators, and training
courses.

“With more than 1,100 troops, police, and observers deployed as peacekeepers around the world, Uruguay was the top peacekeeping contributor in the Western Hemisphere in 2021,” said U.S. Army First Lieutenant Juan Villarreal, the Global Peacekeeping Operations Initiative Program Manager at the U.S. Embassy in Uruguay. Villarreal continued: “More impressively, one out of every 3,000 Uruguayans is on a UN peacekeeping mission at any given time while 20 percent of the armed forces, and nearly all Army officers, have participated in at least one mission.”

Uruguay is sought out as a professional and experienced peacekeeping force, and each of Uruguay’s forces has an in-demand specialized capability: the Air Force has an all-weather, nighttime medevac capability; the Navy has lake and riverine patrol capability; and the Army has construction and engineering capabilities. The U.S. is proud to stand by Uruguay as a peacekeeping leader.

More information about the Global Peace Operations Initiative (GPOI) can be found here: