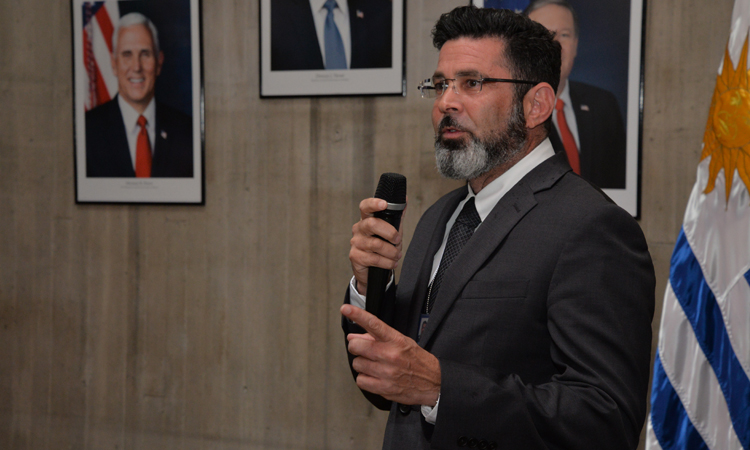 Overseas Building Operations (OBO) Project Director Jose Padilla began the presentation with a review of the U.S. Embassy Montevideo’s history and the reason for the project, highlighting the need for mechanical, electrical, and security upgrades to comply with building and safety regulations.  He also referred to the major upgrade to the Consular section, with the creation of a separate embassy entrance to streamline visa applicant traffic.

Mr. Padilla emphasized the contributions of local companies on the project, such as Stiler, which is our construction partner working through the project’s end; and Costa Fortuna, contracted by Perini Management Services Incorporated (PMSI) to install piles for the Embassy’s new utility building’s foundation.

Mr. Padilla addressed several questions from neighbors about the new utility building.  He clarified that while the presentation used different renderings than were used in prior meetings, the design and size of the building has not changed.  Padilla also confirmed that the final utility building will not extend outside of the property line.  He further clarified that the temporary construction fencing that is now in place will be removed once the utility building is finished.  Mr. Padilla also restated that the buildings in Plaza Piera are temporary and the area will be restored to its original condition after completion of the project.

Other issues discussed during the meeting include blocked views during the construction project and a lack of trashcans in the neighborhood.  Councilman Gustavo Zúñiga of the Intendencia addressed the community by saying that he recognizes that some of the neighbors’ concerns are not directly related to the U.S. Embassy, and made himself available for whatever the neighborhood community might need to address.  Furthermore, Mr. Zúñiga reported that he was not aware of the lack of trashcans in the nearby neighborhood, although he did admit that this has been a citywide issue.   He suggested neighbors voice their opinions directly to the Intendencia, and that he would personally see to it that the Intendencia supply additional trashcans.