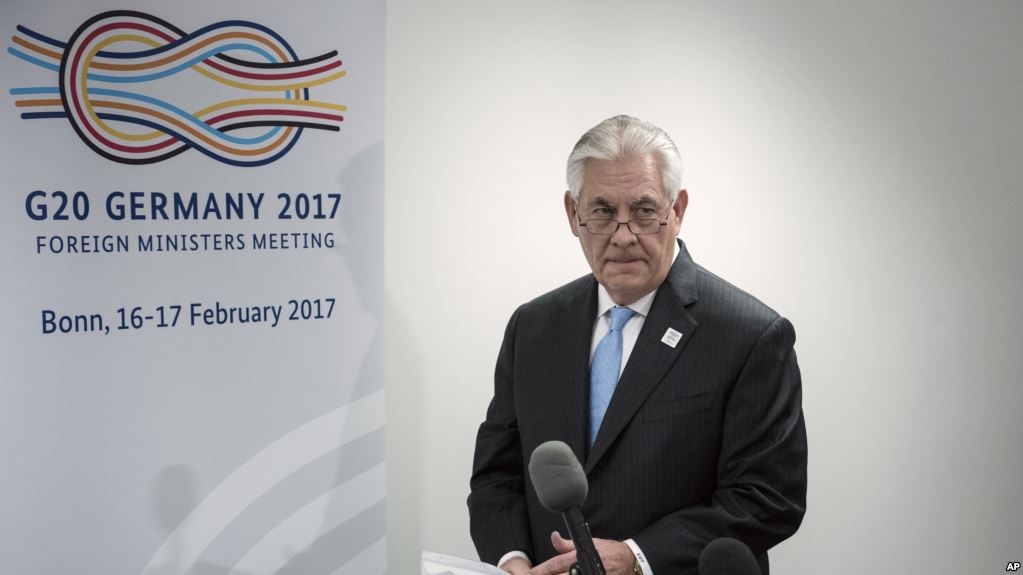 U.S. Secretary of State Rex Tillerson arrives to make a statement after a meeting with Russia's Foreign Minister at Sergei Lavrov at a G-20 metting in Bonn, Germany, Feb. 16, 2017.

“As we search for new common ground, we expect Russia to honor its commitment to the Minsk agreements and work to de-escalate violence in the Ukraine,” Tillerson said in Bonn, where foreign ministers of the G-20 nations are meeting. Tillerson spoke after meeting with Russian Foreign Minister Sergei Lavrov. Before the meeting Lavrov said Russia does not meddle in the internal affairs of other countries.

Under the 2015 Minsk agreement, Ukraine, Russia and Russian-backed separatists agreed to end the crisis in Ukraine, beginning with the withdrawal heavy weapons. In 2014, Russia annexed Ukraine’s Crimean peninsula, and fomented and supported a separatist conflict in the country’s east that has since claimed close to 10,000 lives. Moscow denies direct involvement in the conflict.

Earlier this week U.S. President Donald Trump accepted the resignation of his national security advisor, Michael Flynn, following reports he misled the administration about conversations he had with Russian ambassador Sergey Kislyak.

Several U.S. investigations are underway into alleged interference by Russian intelligence services in favor of Trump during last year’s U.S. presidential election. President Trump has dismissed the allegations as nonsense. Russian President Vladimir Putin, meanwhile, called Thursday for a restoration of ties between U.S. and Russian intelligence agencies to work on common problems.

“Restoring dialog with the special services of the United States and other NATO members is in our mutual interest,” Putin said in a televised speech before Russia’s Federal Security Service. Tillerson is attending his first G-20 meeting, hosted by German Foreign Minister Sigmar Gabriel, who has been a vocal critic of some of Trump’s pronounced policies.

The G-20 countries account for about 85 percent of the world economy and two thirds of the global population. The Bonn meeting is a precursor to a G-20 summit scheduled for July in Hamburg in what may be the first time Trump meets Putin in person.