On March 17, 2015 U.S. Chargé d’ Affaires in Uruguay Bradley Freden traveled to the interior of the country to visit two very important American companies in Uruguay: Schreiber Foods and Cargill.

Mr. Freden traveled with the Embassy Commercial Specialist Robert Gorter and the Press Specialist Rubek Orlando. They first visited Schreiber Foods Uruguay, in San José, where they were met by its Manager Ricardo Pirotto. While touring the facility and the industrial plant, Mr. Pirotto shared with Mr. Freden the history of the company and some details of their operation in Uruguay, their international markets, their exports and what they produce.

Then Mr. Freden participated in a very big event organized by Cargill in Uruguay. It was a triple celebration: 150 years of Cargill, 10 years of presence in Uruguay and the inauguration of a new silo plant. 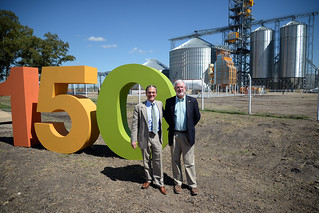