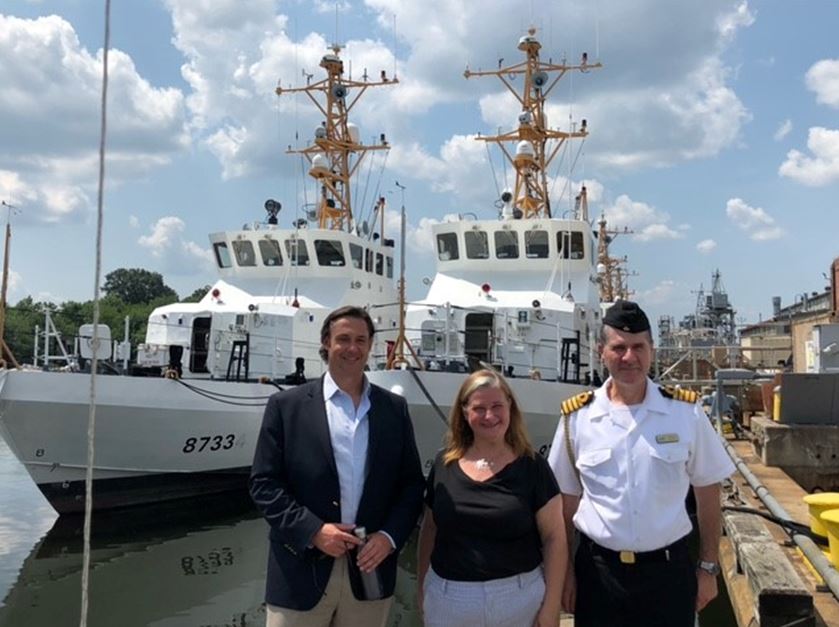 On December 15, 2021, Admiral Jorge Wilson, Commander of the Uruguayan Navy, signed a Letter of Acceptance (LOA) finalizing the government-to-government agreement between the United States and Uruguay, allowing Uruguay to accept three Protector Class vessels as part of a grant from the United States Coast Guard as part of the Uruguayan Navy’s Fleet Modernization plan. The three vessels, USCG Cutters Albacore (WPB-87309), Cochito (WPD-87329), and Gannet (WPB-87334), were all commissioned between 1999 and 2009. The original cost of the vessels was US$14,361,000 and the current estimated value is US$ 8,685,000.

Uruguay will receive the vessels themselves as a no-cost grant but, in accordance with U.S. law, will be responsible for paying US$ 4,986,296 for the vessels’ refurbishment, and for training for Uruguayan Navy personnel to employ the ships.

“We began working with Admiral Wilson and the Uruguayan Navy about the possibility of donating these vessels in June of 2020,” said Colonel Brian Symon, Senior Defense Official at the U.S. Embassy Montevideo. “Our Office of Defense Cooperation is proud that this process is moving forward after more than a year of close coordination between our two Embassies, their Ministry of Defense, ESMADE and the Navy.”

The 87-foot (27 m) Protector Class vessels have a 900 NM (1,700 KM) range, a top speed of 25 knots, and served in the United States on missions including homeland security, combating drug smuggling, immigration enforcement, marine fisheries enforcement and search and rescue support. The ships are designed to accommodate crews of mixed gender with five separate small berthing spaces and maximum berthing for 12. Each ship will include a rigid hull inflatable boat (RHIB) that can be launched from the stern of the larger vessel via an innovative launch and recovery system. This capability allows for crews to quickly intercept, inspect and/or board other vessels while on patrol without stopping. The three specific vessels that Uruguay will receive, now decommissioned by the U.S. Coast Guard, were homeported in Connecticut, Virginia, and Florida.

“I am continually amazed at how Uruguay makes the most of its resources. The U.S. and Uruguay have a long history of cooperation since our office opened here more than 70 years ago, and we are glad the tradition will continue with these very capable vessels,” continued Colonel Symon. “Also, it is clear that Uruguay is very savvy at properly managing their defense budget. In this case, thanks to the U.S. Congress’s grant they are going to receive almost US$13,630,000 million worth of vessels and training for a fraction of the cost. This leaves funds to rebuild or enhance capabilities in other areas. We’re proud to be the trusted partner on their defense modernization and are looking for more ways to collaborate in the near future.”

“I had the chance to tour these vessels back in July with Ambassador Duran and see them up close, as did Admiral Wilson in September. The good news for Uruguay is these ships are a proven workhorse of the Coast Guard, but still have many years of use ahead,” said U.S. Embassy Charge d’Affaires Jennifer Savage. “The oldest of the three has only been serving for 20 years, and is being retired for budget reasons, not because they are near the end of their service life. Uruguay was one of the first countries in the world to request this type of grant. If everything goes as planned, by this time in 2022 we’ll see the vessels flying the ‘Pabellón Nacional Uruguayo’ and patrolling in the Rio De La Plata, enhancing maritime security and economic sovereignty in Uruguayan waters.” Now that the United States and Uruguay have agreed to the terms of the grant, work will proceed in the United States to refit the three vessels. As the Uruguayan crews learn the intricacies of the systems, the titles to the ships will be transferred and they will be re-named as Uruguayan vessels. The ships and trained crews are expected to arrive in Uruguay prior to the end of 2022. “These vessels helped keep our country safe and guarded our democracy for more than two decades. We hope they will be able to do the same for Uruguay for many years to come,” stated Colonel Symon.