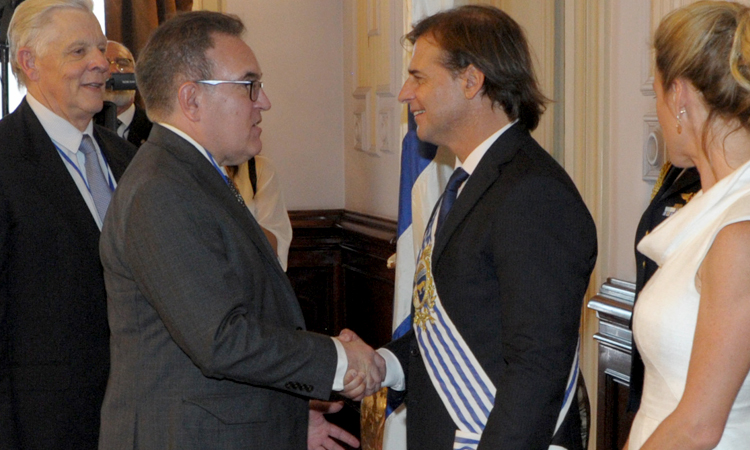 On the occasion of the inauguration ceremony for Luis Lacalle Pou last March 1st, President Donald Trump sent a Presidential Delegation to Montevideo, Uruguay. The delegation was led by Andrew Wheeler, Administrator of the Environmental Protection Agency and U.S. cabinet member, who was joined by U.S. Ambassador to Uruguay Kenneth George and Acting Assistant Secretary of the Bureau of Western Hemisphere Affairs Michael Kozak.

On the day before the inauguration, the U.S. delegation met with Ambassador Kenneth George. “We are countries with a shared rich democratic history,” Ambassador George told Wheeler and Kozak while he showed them the portraits of George Washington and José Artigas in his office at the embassy.

During their time in Montevideo, the members of the U.S. Government met with members of the new Lacalle Pou administration. On Saturday February 29, the first meeting was with Irene Moreira, Minister of Housing, Land Use and Environment, to strengthen cooperation in environmental matters between the United States and Uruguay. “The government is on top of a number of different issues and challenges, just as we are. And there’s a lot that we can learn from what they’re doing here, and what they can learn from what we’re doing in the United States,” said Wheeler after his meeting with Moreira.

On Saturday afternoon, they met with Foreign Affairs Minister Ernesto Talvi and Deputy Secretary Carolina Ache. “We’re talking about opportunities ahead of this new chapter between our two governments” under the leadership of President Luis Lacalle Pou, said Wheeler.

After the meetings, Mr. Wheeler talked to the local press about the agenda for his visit.

“It’s a pleasure to be here today on behalf of President Trump to celebrate the inauguration celebrations this weekend. I’m here to reinforce our commitment to Uruguay, our shared domestic values are the foundation of our strong diplomatic relationship which has now spanned more than 150 years,” said the head of the U.S. delegation.

You can access the recording of the press conference here.

On March 1, the delegation went to the Parliament building for the ceremony before the General Assembly and President Lacalle Pou’s inauguration speech.

Then, they attended the presidential sash transfer ceremony at Plaza Independencia. Once that was over, the presidential delegation went to the José Artigas building together with international representatives and authorities to greet the new President of Uruguay.

At the end of his visit, Mr. Wheeler thanked President Lacalle Pou for his generous hospitality during his visit to “the beautiful country of Uruguay” via Twitter.

Congratulations on the inauguration of President Dr. Luis Lacalle Pou. Thank you for your generous hospitality during our visit to the beautiful country of Uruguay and I look forward to our nations’ continued partnership. https://t.co/n5Eansa8xL

In turn, after visiting Uruguay, Mr. Kozak said that “the United States look forward to working with Uruguayan President Luis Lacalle Pou to expand bilateral trade, develop global security, and strengthen our democratic values.” He also said it was a pleasure to represent the Department of State and President Donald Trump in this inauguration ceremony.