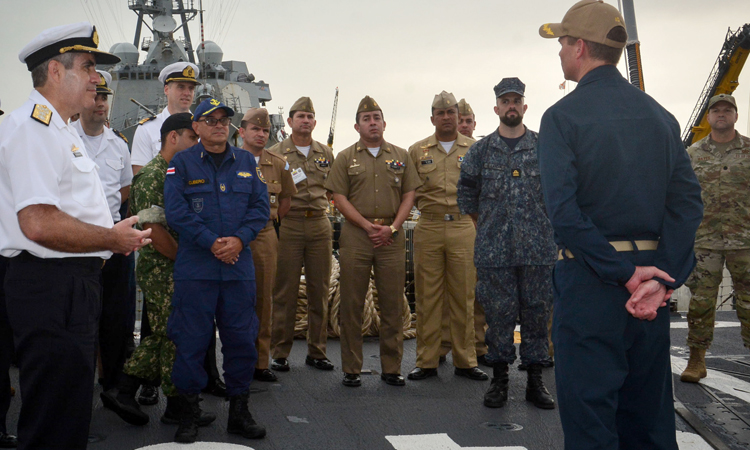 Two Uruguay Navy officers were funded by the U.S. Navy to travel to Mayport, Florida, U.S.A. to participate in the Exercise PANAMAX 2022. The event concluded in August at U.S. Naval Forces Southern Command/U.S. 4th Fleet (USNAVSO/4th Fleet). This is the second consecutive year in which Uruguay has participated. Last year, Uruguay sent experts from their Navy to observe the Large Force Exercise and this year their officers served on the multi-national staff.

Since its inception in 2003, PANAMAX has become one of the largest coalition Command Post exercises in the world. The exercise is focused on Panama Canal defense, one of the most strategically and economically crucial pieces of global infrastructure. To comply with a United Nations Security Council resolution requirement, the exercise participants ensure the canal remains open for international trade and military transport.

“We were pleased in 2020 when our Uruguayan partners asked to re-integrate into regional exercises alongside the U.S. and our partners,” said Colonel Gary Symon, U.S. Air Force, Senior Defense Attaché at the U.S. Embassy in Uruguay.

“Uruguay is a respected regional and hemispheric leader. Our Office of Defense Cooperation has worked hard to ensure Uruguay Navy and Marines could participate in three different UNITAS events, and two PANAMAX events. We’ve received nothing but positive feedback from Uruguay’s participation, with exercise leaders consistently highlighting the professionalism of Uruguayan personnel.”

In the exercise scenario, participants from air, land, special forces, and maritime components formed a multinational force to defend the Panama Canal as directed by a United Nations Security Council resolution. The scenario simulated operations in the canal and its regional waters in both the Eastern Pacific Ocean and the Caribbean Sea. “Uruguay is a global leader and top troop-contributor to U.N. Peacekeeping Operations. Their participation in this exercise, simulating the enforcement of a U.N. Security Council Resolution, enabled all participating nations to learn from their experience,” said Col. Symon.

Bilateral cooperation in allied military exercises like PANAMAX is just one of the ways that Uruguay and the U.S. have interacted since the ODC was opened inside the U.S. Embassy in Montevideo in 1951. A Mutual Defense Assistance Agreement was ratified soon after, on June 30, 1953. Since then, United States and Uruguay’s military-to-military engagement has also included professional education and technical training, defense of human rights, women in peace and security engagement, combined disaster and pandemic relief, peacekeeping collaboration, and countering illegal fishing. All of these events support the U.S. Embassy’s strategic priorities in Uruguay.