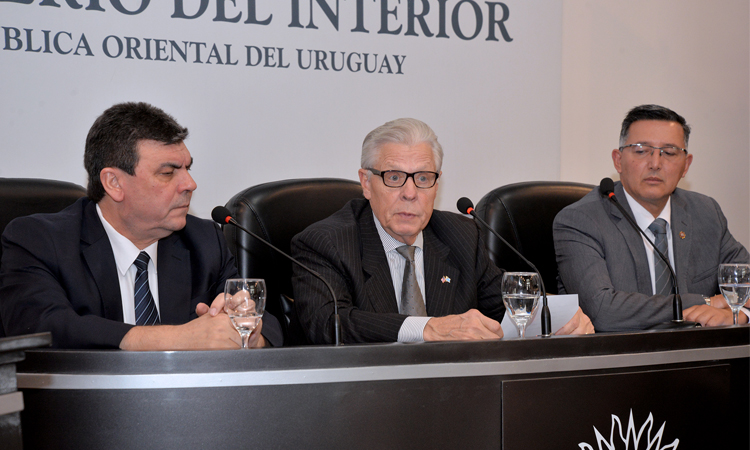 U.S. Ambassador to Uruguay Kenneth George signed a Memorandum of Understanding with the National Police to give Uruguay access to the eTrace electronic system to trace firearms. Ambassador George signed on behalf of the Bureau of Alcohol, Tobacco, Firearms and Explosives (ATF) of the U.S. Department of Justice, and the Uruguayan National Chief of Police, Inspector General (R) Mario Layera, and the National Director of Scientific Police, Inspector General José Azambuya, signed on behalf of the Uruguayan government.

Ambassador George said in his remarks that “eTrace is just a piece in a large mosaic of cooperation between our two countries to build and strengthen our cooperation with law enforcement.”

By signing this MOU, the ATF gives the National Police of Uruguay access to the eTrace system to trace firearms, which offers an online database of all inquiries made around the world (free of charge) and provides significant input in criminal investigations. In addition, it also gives the necessary tools to send, retrieve, save, and confirm all information related to firearm tracing.

ATF is a federal law enforcement agency under the U.S. Department of Justice focused on preventing terrorism, reducing violent crimes, and protecting the nation. In an effort to increase domestic security in the United States, ATF partners and collaborates with foreign governments and their law enforcement agencies with the purpose of supporting partner and ally nations in the fight against international criminal organizations whose activities pose a threat to world citizens and peace.

Law enforcement agencies who are committed to doing comprehensive and organized traces of firearms used to commit crimes can use the data from eTrace effectively to trace firearms, in order to device the best investigative strategies to reduce crime rates and violence related to firearms.

Authorities from Police Departments and Ministries were present at the event, as well as the U.S. Ambassador and Martin Young, ATF Regional Attaché for Central and South America.

About the Bureau of Alcohol, Tobacco, Firearms and Explosives

ATF is a law enforcement agency in the United States’ Department of Justice that protects our communities from violent criminals, criminal organizations, the illegal use and trafficking of firearms, the illegal use and storage of explosives, acts of arson and bombings, acts of terrorism, and the illegal diversion of alcohol and tobacco products. ATF partners with communities, industries, law enforcement, and public safety agencies to safeguard the public it serves through information sharing, training, research, and use of technology.