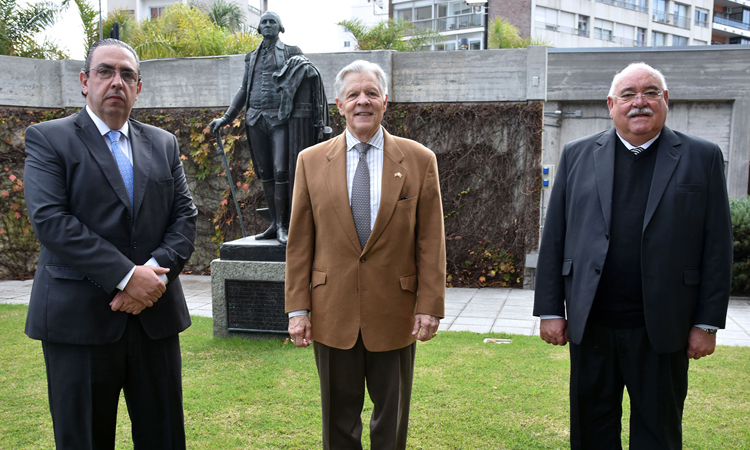 On Friday 12 June, the United States Ambassador in Uruguay, Kenneth George, held a meeting at the Embassy with Dr. Marcelo Secco, CEO of Marfrig-Tacuarembó and Mr. Daniel Belerati, CEO of the Uruguayan Meatpackers Chamber.

Over the past months there has been much discussion in the media about the renegotiation of Uruguayan beef export contracts after shipments have departed the port of Montevideo. U.S. Ambassador Kenn George hosted a meeting with the CEOs of Marfrig-Tacuarembó and the Uruguayan Meatpackers Chamber, Dr. Marcelo Secco and Mr. Daniel Belerati, to discuss the current state of the beef sector.

“I am encouraged that the U.S. is the largest buyer of high-end beef cuts,” stated Ambassador George, “and I want to explore increasing this niche export to the U.S.,” he added.

During the meeting Secco and Belerati shared their perspectives on the current situation of the meat industry in Uruguay, the supply chain, and commercial relations with Uruguayan meat buyers around the world.

Ambassador George highlighted the similarities between Uruguay’s cattle and ranch culture with that of the United States, especially his home state Texas.  Ambassador George, Secco, and Belerati, reminisced on their cowboy days and how much the beef industry has contributed to their love for the countryside.

Secco and Belerati said they valued the United States as a consistent and reliable trade partner, highlighting the transparency the U.S. market.  With full access to all market information and an ease of doing business,

“The United States is the most transparent market there is,” Secco said.